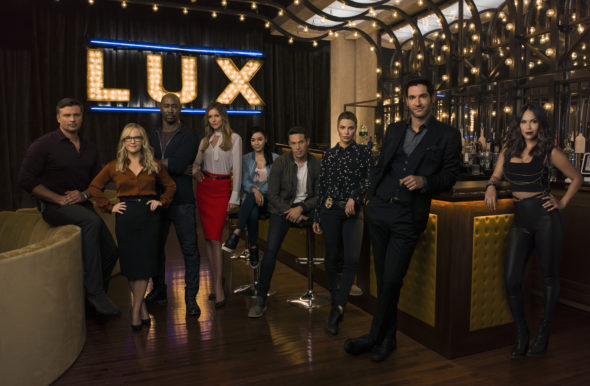 Is the devil you know still better than the devil you don’t? Has the Lucifer TV show been cancelled or renewed for a fourth season on FOX? The television vulture is watching for the latest cancellation and renewal news, so this page is the place to track the status of Lucifer, season four. Bookmark it, or subscribe for the latest updates. Remember, the television vulture is watching your shows. Are you?

Airing on the FOX television network, Lucifer stars Tom Ellis, Lauren German, DB Woodside, Lesley-Ann Brandt, Kevin Alejandro, Rachael Harris, Aimee Garcia, Tricia Helfer, Scarlett Estevez, and Tom Welling. The supernatural procedural centers on Lucifer Morningstar (Ellis) who abandoned his throne, retired to Los Angeles, opened up a nightclub, and started helping LAPD Detective Chloe Decker (German) crack cases. Now with his mother (Helfer) taken care of, in season three, Lucifer wants to figure out who kidnapped him and why his angel wings have returned. He also has to deal with a new rival for Chloe’s attention, Lieutenant Marcus Pierce (Welling), who, unlike Lucifer, is strategic, reserved, and well-respected.

The third season of Lucifer averaged a 0.83 rating in the 18-49 demographic and 3.30 million viewers. Compared to season two, that’s down by 20% and down by 10%, respectively. Find out how Lucifer stacks up against the other FOX TV shows.

Although it premiered with okay numbers, the ratings for Lucifer are even lower than last year’s (and those weren’t very good). I suspect it will be back for a fourth season but it could easily be cancelled due to the low ratings. For now, I’ll keep an eye on the Nielsens and update this page with breaking developments. Subscribe for free updates on any Lucifer cancellation or renewal news.


What do you think? Were you hoping that the Lucifer TV show would be renewed for a fourth season? Will you follow this TV series from FOX to Netflix?

Fox if you cancel Lucifer you will be the loser less of will watch fox you will lose a lot of money. Fox really. We the people love the show the rating was not bad. so why cancel. Do not cancel Lucifer. Thank you

Please bring Lucifer back, it was such a good show. I won’t pay for Netflix, I pay enough for cable and will not pay even more for shows I like

Just wanted to say “Lucifer” was a refreshing show. You made the wrong choice by cancelling Lucifer.

I totally enjoyed the show & would love for it to continue,but I’m not able to pay anything extra to watch on line,u-tube or whatever. I’m already paying way to much just to watch my favorite shows as it is & I do consider this one of my favorite shows. Besides I’m old & half blind & do not have the income to have to pay to watch any shows that’s not on any of the channels that I’m already paying to much for,Spectrum is makin a killin off of folks

I love the show Lucifer. However I will not pay for Netflix to watch it. So unfair!

Bring back Lucifer to TV not Netflix!!

Please do not cancel Lucifer, I really love that show!!! Welcome into 2018 and stop using the Nelsons, that information is so out dated!!!! Maybe you should ask the general pubic via computer. I do not want to watch what others think everyone would like to watch. I was never asked to rate any show and as you can see there are so many people the enjoy this show. Give Lucifer another season.

Thank you for your consideration and please send me a questioner and I would love to rate shows anytime you would like.

Bring back Lucifer! Great show I don’t want to see it go 🙁

As most of you probably know, and as several people indicated – it was picked up by Netflix, and at least some (sorry, I didn’t read all 21 pages of this) said something to the effect of: “I love it, but I won’t pay for Netflix, I pay too much for cable already.” I say, Cancel your cable! You are watching a bunch of channels that run tons of (usually) very irritating ads, very often. You Pay. And you get plasterd with ads. What the heck? I watched Lucifer season 1-2-3 virtually non-stop .. I think I slept a few… Read more »

I am so agree. I have only Netflix and i love Lucifer. How this show has been canceled !?
So happy to see season 4 on may the 8th.