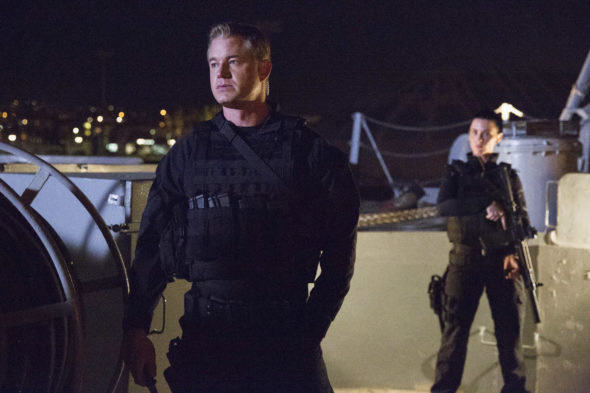 While no one is using the word “cancelled,” it’s now official. The Last Ship TV show on TNT will end with its upcoming fifth season.

Beginning in September of 2016, when TNT issued a (way) early season five renewal, it seemed likely The Last Ship would end with season five. Then, in September of 2017, when production wrapped, one of the cast referred to said wrap as a “series wrap” rather than a “season wrap,” which made cancellation, i.e. the show’s end, seem all but a done deal. Now, Turner Chief Creative Officer and President of TNT and TBS Kevin Reilly has confirmed the fifth season will be the series’ last, at today’s Upfront presentation advertisers.

A TNT post-apocalyptic drama The Last Ship stars Eric Dane, Bridget Regan, Adam Baldwin, Charles Parnell, Travis Van Winkle, Marissa Neitling, Christina Elmore, Jocko Sims, Bren Foster, and Kevin Michael Martin. The action centers on the crew of the USS Nathan James, which must try to find a cure for a deadly virus that has wiped out most of the world’s population and subsequently infects food crops.

The Last Ship: A Look at the Ratings

The fourth season of The Last Ship averaged a 0.31 rating in the 18-49 demographic and 1.55 million viewers. Compared to season three, it was down by 38% and down by 30%, respectively. Find out how The Last Ship stacks up against other TNT TV shows.

What do you think? Are you a fan of The Last Ship TV series? Do you think the fifth season is a good time to end it? If it were up to you, would The Last Ship be cancelled or renewed for season six on TNT?

I love The Last Ship and don’t want it to end! This show represents a very realistic vision of a post worldwide plague with the political and military capabilities that are at risk and how social impacts will arise as a result. Powerful and critically imagined to bring awareness to the public that we are woefully ill-equipped to survive this level of catastrophic proportions. We need this type of show for humanity to be united together!

I believe the last ship should continue with series 5 endings and 6 rescuing the ship from death the last ship is a great program and should carry-on bringing out more series like series 6+7maybe more I bet the fans are really pissed off now it’s over bring it back .

Love this show… do not want to see it canceled