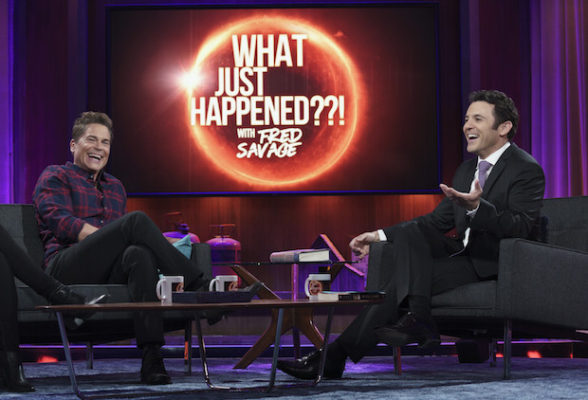 What will happen to What Just Happened??!? FOX boss Michael Thorn recently spoke with Deadline about the future of the TV show.

During this year’s summer TCA press conference, FOX chief Michael Thorn told Deadline a second season of What Just Happened??! would be “challenging.” The show has not been cancelled yet, but it seems likley.

However, even though What Just Happened??! hasn’t been a huge success, Thorn did say it’s been a great experiment:

While it didn’t break through in the ratings, it has been a great calling card for us in the comedy community where many creators and comedians have told us: ‘I can’t believe you tried that show, that’s amazing. Can I be on it if it’s on again?’”

What do you think? Have you seen What Just Happened??!? Would you watch another season?

The concept is amusing but it is very limited in where and how long it can go.

Quite possibly the worst show ever. Next to Stop 1-2-3.

Saw it on Hulu, but they don’t have the Flare on Hulu, so it didn’t make sense for me to keep watching it.

The Flare isn’t a real show!

Would TV execs please stop basing everything on the 18 – 49 demo who will wait until they can binge most things?

That said sorry to see the show go, but can they actually do The Flare now?

I got through first episode and never watched again. Host and co host were too cringy. They should have worked in the personality quirks slowly but hit us too hard with them. I like Fred in other things but he was too unrealisticly pathetic right off the bat.