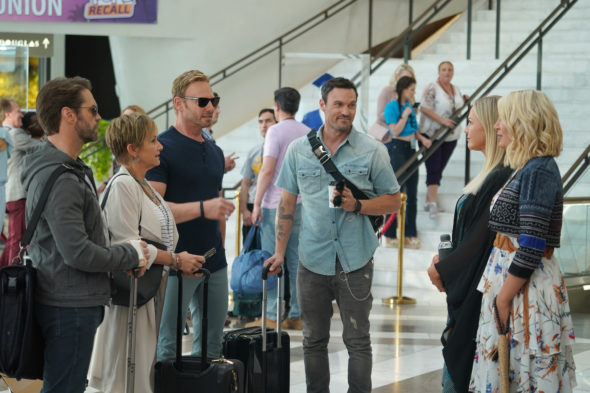 Speaking to TVLine, Thorn revealed that FOX decided to keep BH90210 as a one-time event series:

To sustain something that meta and heightened in the long-term is incredibly hard. We always kind of envisioned it as an event… So we felt like to do it as a short-term event where you could just catch up with these actors that you love and do something that was wildly different was a great way to honor the legacy of the show.”

What do you think? Did you watch BH90210? Would you have watched a second season?

Thank the Gods. We just narrowly escaped a trend of fictional non fiction fiction reboots with has-been wannabes from the 90ies. Whew.

I LOVED the show! Why can’t they do periodic episodes? 3 episodes a season? Do them as they can put the cast together. It was GREAT seeing them together!!!! I know I wasn’t the only one that enjoyed it. Even my husband enjoyed it. Please reconsider. It was a bad choice to cancel.

I absolutely loved this series. It was so great seeing them acting like real people and poking fun at their younger fictional counterparts. I truly enjoyed the banter and the fact that they were saying what we were all thinking. Sustaining it long term would be tough, but maybe check back every few years or so? Totally on board for that!!

The main reason it was cancelled, FOX did not own Beverly Hills 90210, CBS did.

Awesome show should have had a second season and why the put a show in summer anyways most people goes on vacation. They could have been moved they story lines around like they did with orginal it debut was not good ether

If an ABC, Fox or SyFy show is fun and original you can count on it getting cancelled.

But, by all means, let’s have a bunch of spin-offs from tired old dramas like 911, Grey’s, FBI, etc. instead. Gives me more time to catch up on other channel’s that give good shows a chance.

I was a big fan back in the day. I did watch the new season and it was nothing like I thought it would be. I wasn’t all that impressed. I feel if they would of picked up from their younger years and turned it into what their lives would have been now it may have gone over a little better. Just wasn’t what I was expecting.

I watched it with my adult daughter. She was a child when it was originally on in the 1990s and enjoyed watching it with her cousin. I didn’t care for the remake. I think they should have just kept it to the original characters. It would have been more interesting. They kept showing Tory Spelling’s cleavage and it was really yucking and un-natural looking. Google it.

I loved it and wish they would of renewed it or hope so other tv sponsor will Netflix, hulu,

Definitely would have watched again. It was entertaining and funny! Love the twist. Nothing like it on t.v.

I loved it and wish it was renewed. Hopefully another network or streaming platform will see its value and pick it up.