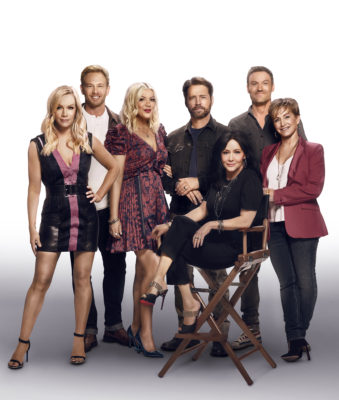 FOX’s Beverly Hills, 90210 reunion series premieres tonight, but will there be a second season? Recently, the stars of BH90210 discussed the possible future of the “event” TV show, Deadline reports.

The reunion series will see Shannen Doherty, Jason Priestley, Jennie Garth, Ian Ziering, Gabrielle Carteris, Brian Austin Green, and Tori Spelling “reunite when one of them suggests it’s time to get a “Beverly Hills, 90210″ reboot up and running.” A reboot of the original series, 90210 ran on The CW from 2008 to 2013.

We would love to continue to work together. It’s been such an amazing experience. I liken it to high school when you think oh you never get a chance to do a do-over and there are things that you know now that you didn’t know then that you would’ve done differently and we get that opportunity… We have so many stories to tell that this could keep going season after season so we hope it does.”

I knew that the show would get sold and do well with or without me. They didn’t need me. It just wasn’t, at that point, what I wanted to be doing. When Luke passed away things drastically changed for me. I felt like it was a great opportunity to honor him. I’m glad I made that decision because I can sit up here with these people that I respect. We went on this amazing journey where we got to heal through losing somebody who means the world to all of us.”

I am so enjoying watching the BH 90210 Reboot! I watch the originals and then the new series reboot! Please keep making the series and give us loyal fans the opportunity to have our favorite series back in our living rooms again… I love feeling like I am visiting old friends and catching up; this reboot is such a comfort and feel good show! Please keep them coming; I am so thrilled to have my favorite show on again and the opportunity to share it with my children! Please, please keep them coming!
Thank you