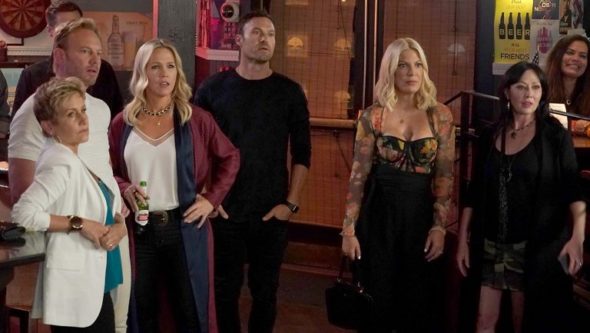 The reunion for the cast of Beverly Hills, 90210 is over, at least for now. FOX’s BH90210 series has been cancelled so the summer show won’t be returning for a second season.

A comedy-drama series, BH90210 stars Jason Priestley, Shannen Doherty, Jennie Garth, Ian Ziering, Gabrielle Carteris, Brian Austin Green, and Tori Spelling. Instead of playing their old Beverly Hills, 90210 characters, the actors play highly fictionalized versions of themselves reuniting to reboot the original series. Revisiting the past creates more soapy drama than is present in the show-within-the-show. When first loves, old flames, friends, and enemies reunite and try to pick up where they left off, anything can happen.

The first season of BH90210 on FOX averaged a 0.88 rating in the 18-49 demographic and 2.51 million viewers. It was the network’s highest-rated summer series in the demo and was in second place in viewers. It started strong but the numbers dwindled as the weeks progressed.

Though it was billed as an “event” series, producers were open about their hopes for a second season. The sixth and final episode ended with a cliffhanger.

“We are so proud to have reunited in a very special summer event one of the network’s legacy series and casts with 90210 fans across the country,” notes a FOX statement. “Profound thanks to and respect for Brian, Gabrielle, Ian, Jason, Jennie, Shannen, and Tori, who, along with the entire crew and everyone at FOX and CBS Television Studios, poured their hearts and souls into this truly inventive and nostalgic revival.”

What do you think? Did you enjoy the BH90210 series on FOX? Would you like to see this or some other 90210 connected program to return someday?

I really liked the show. It took a min to get used to the new caricatures. Once I did I really looked forward to watching it again. Netflix should pick it up since Fox won’t do what the fans want. Just like when Lucifer was on. They canceled it and the fans saved it.