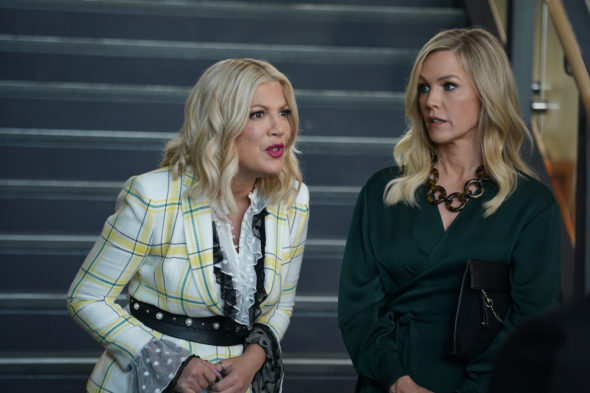 Was Thomas Wolfe wrong; can you go home again? Has the BH90210 TV show been cancelled or renewed for a second season on FOX? The television vulture is watching for the latest cancellation and renewal news, so this page is the place to track the status of BH90210, season two. Bookmark it, or subscribe for the latest updates. Remember, the television vulture is watching your shows. Are you?

A FOX comedy-drama, BH90210 stars Jason Priestley, Shannen Doherty, Jennie Garth, Ian Ziering, Gabrielle Carteris, Brian Austin Green, and Tori Spelling. Instead of playing their old Beverly Hills, 90210 characters, the actors play highly fictionalized versions of themselves reuniting to reboot the original series. Revisiting the past creates more soapy drama than is present in the show-within-the-show. When first loves, old flames, friends, and enemies reunite and try to pick up where they left off, anything can happen.

Will FOX cancel or renew BH90210 for season two? The series got off to a great start but the numbers saw significant drops in subsequent weeks. The actors say they’d like to make a second season even though the show’s been described as an “event” series. Based on the numbers, it doesn’t look like FOX should renew the series but I suspect they will anyway. I’ll update this page with breaking developments. Subscribe for free BH90210 cancellation and renewal alerts.

What do you think? Are you sorry that the BH90210 TV show hasn’t been renewed for a second season?

Please, please renew. It made my Summer, it was so nostalgic and fun. I don’t know anyone 35-50 that didn’t watch it!!! We all loved it, and please explain how Ian/Steve does…not…age.

I love this reboot. It’s both funny and sad. Please renew.

I really hope Shannon is in Season 2 if there is a season 2. Show would be boring without her

Renew it! Please! I found myself going back to little snip its of my youth while enjoying modern twists. LOVED the added Steve drama with Denise Richards. Only one negative and not sure if it was due to legality -wish there was more of a tribute to Luke ❤️

SERIOUSLY RENEW THIS SHOW!!!!!!!!!!! For a JUICY SECOND SEASON PLEASE

CANCEL this show it is so stupid. Mostly unsuccessful actors who can’t get other work.

this is kendra sheetz from ohio formely from maryland and im writing to fox regarding bh90210..PLEASE BRING SEASON OF BH90210 ive been watching since i was in middle school..i woulod love to see more eps and seasons of bh 90210.. i loved i reboot it just interseting in ep 6 so PLEASE im begging you brinf back JENNIE, JASON, GABBIE, TORI, BRIAN, AND IAN. And make s better triubte to the late luke perry aka dylan mckay. Aot of people on facebook love watching this show..im just one out of millions people that love watching the show i watch it… Read more »

The episodes keep getting better, yet the ratings are falling. Can’t figure it out, I wonder if a lot of the target audience is away or even going back to college. In any event, BH90210 is my new favorite show, so I’m really hoping for a renewal.