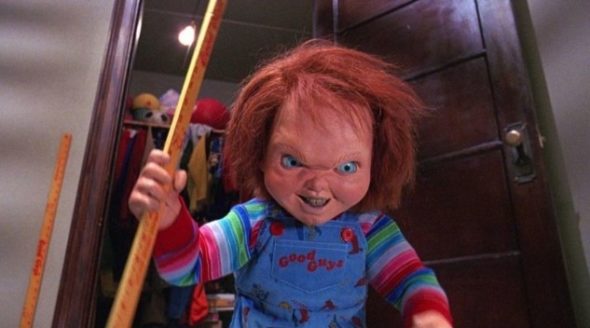 Chucky is coming to the small screen. Syfy just announced they’ve ordered a TV show based on the horror movie franchise.

From creator Dan Mancini, the series will see a small American town thrown into chaos after the arrival of a vintage Chucky doll. The TV show is the latest in the Chucky franchise, which began with the 1988 film Child’s Play.

Read more details from Syfy below:

“The character Don and David created has terrified audiences for over 30 years. The longevity and legacy of Chucky speaks to the creative storytelling and the loyal fans the film series has collected over the years,” said Chris McCumber, President, Entertainment Networks – USA & SYFY. “We are excited to once again partner with Nick and UCP on this new SYFY series, and are incredibly proud to bring Chucky to television for the first time with the original creators.”

In the new CHUCKY television series, after a vintage Chucky doll turns up at a suburban yard sale, an idyllic American town is thrown into chaos as a series of horrifying murders begin to expose the town’s hypocrisies and secrets. Meanwhile, the arrival of enemies – and allies – from Chucky’s past threatens to expose the truth behind the killings, as well as the demon doll’s untold origins as a seemingly ordinary child who somehow became this notorious monster.

In 1988, Chucky slashed his way into the pop culture zeitgeist with the premiere of “Child’s Play” directed and co-written by Tom Holland, produced by Kirschner, and based on a story by Mancini. The international sensation spawned six sequels, all of which Mancini wrote and Kirschner produced. Mancini also directed three of the films in the franchise: “Seed of Chucky” (2004), “Curse of Chucky” (2013) and “Cult of Chucky” (2017).

What do you think? Are you a Chucky fan? Will you watch the Syfy series?

Didn’t know of this series but I’m a chucky fan and Tiffany fan!!

This will be a great show. I like Chucky alot.

OMG, PLEEEEEASE NO!!!!! Ok, I know there are lots and lots of fans of the “Childs Play” series, but really? A series based on it?

Why not restart something like a KRYPTON for a Season Three. SyFy has had a bad habit of getting something started and as soon as us fans are hooked on it, they pull the plug.

There are so many other stories out there in the fantasy, Syfy, horror realm that would be better suited than that.

yep syfy just keeps puttin out garbage an cancelling all the good shows.its a shame really used to like an respect this network.