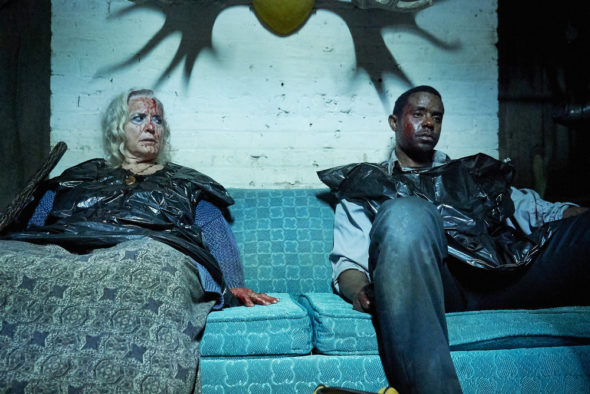 It looks like Syfy is ready to change the channel. Deadline reports the network has cancelled Channel Zero after four seasons.

The most recent season of the horror anthology series, season four’s The Dream Door, follows newlyweds Jillian (Maria Sten) and Tom (Brandon Scott), who have each brought secrets into their marriage. When they discover a strange door in their basement, those secrets start to threaten their relationship — and their lives.

Ratings have never been particularly high for Channel Zero and season four was no different. Overall, the season averaged a .07 rating in the 18-49 demo and only 265,000 viewers. That’s a 20% drop in the ratings from season three. Not so great for even a cable network like Syfy.

You can read executive producer Nick Antosca’s reaction to the cancellation below:

What do you think? Have you seen Channel Zero? Are you sad it’s been cancelled?

Super sad—the nightmares we’ll never meet. I used to drive through the desert in New Mexico after midnight and listen to Art Bell to scare the beejezzus out of myself. Dan Akroyd called into Bell’s show one night and said he was driving through the desert listening to the show to scare himself. I felt a little less alone. Channel Zero was my scary ride. I bet Akroyd liked Channel Zero.

So sad that they are not continuing this show. Loved them!

Season 2 (No-End House) was the best

i quit watching mainstream TV and stick to netflix and hulu,etc…
if i had seen some previews or something about it MAYBE i would have watched it.
right now, im really preturbed that punisher is going bye bye.
i, totally boycotting disney/marvel if punisher not renewed.
i quit watching the walking dead after they killed glenn the second time.
havent watched it since then and dont care about it.
when
producers make a bad call on characters or renewals i just stop watching series.
sorry for everyones lost here at channell zero,

Completely agree! Sick of all the money hungry b.s. that ruins everything. Endgame, game of thrones, and the lack of any originality in anything today. Another great show if not the best on t.v. cut short. Unless ur playing a doctor, cop, or are Gordon Ramsey it’s not going to be a hit. Thanks to all the original minds that watch t.v. today and wouldn’t know something good if it hit you in the balls. Stream and boycott. Maybe they will actually listen. Sorry about channel zero Mr. Antonia but thank u for giving us at least 4 installments of… Read more »

The vast majority of Syfy are style over substance and can’t be watched beyond a couple of episodes.

This is one of the exceptions that has very interesting story lines too.

I loved Channel Zero and will miss it very much.