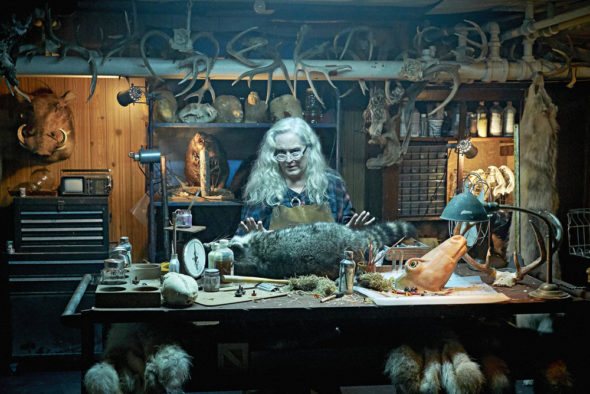 Is this horror anthology series on the chopping block? Will the Channel Zero TV show be cancelled or renewed for a fourth season on Syfy? The television vulture is watching all the latest cancellation and renewal news, so this page is the place to track the status of Channel Zero, season four. Bookmark it, or subscribe for the latest updates. Remember, the television vulture is watching your shows. Are you?

Airing on Syfy, each season of Channel Zero tells a new story featuring different characters. Season three, Butcher’s Block, stars Olivia Luccardi, Holland Roden, Rutger Hauer, Brandon Scott, and Krisha Fairchild. Based on Kerry Hammond’s creepypasta, “Search and Rescue Woods,” it follows sisters Alice and Zoe Woods (Luccardi and Roden), who move to a new city. Soon, they learn of a series of mysterious disappearances and discover that something is preying upon the locals.

The third season of Channel Zero averaged a 0.09 rating in the 18-49 demographic and 308,000 viewers. Compared to season two (No-End House), that’s down by 38% and 24%, respectively. Find out how Channel Zero stacks up against the other Syfy TV shows.

Although the third season drew much lower numbers than last time out, fans shouldn’t spend too much time worrying whether Syfy will cancel or renew Channel Zero for season four, since the cable network picked it up through the next installment, last year. I’ll update this page with breaking developments. Subscribe for free Channel Zero cancellation and renewal alerts.

What do you think? Do you hope the Channel Zero TV show will be renewed for a fourth season? How would you feel if Syfy cancelled this TV series, instead?

No surprise here. Since FAILURE is Acceptable at SYFY, why should anyone be shocked that a show currently averaging a 0.10 be renewed for a 4th season? This network is so pathetic that it is disgusting.