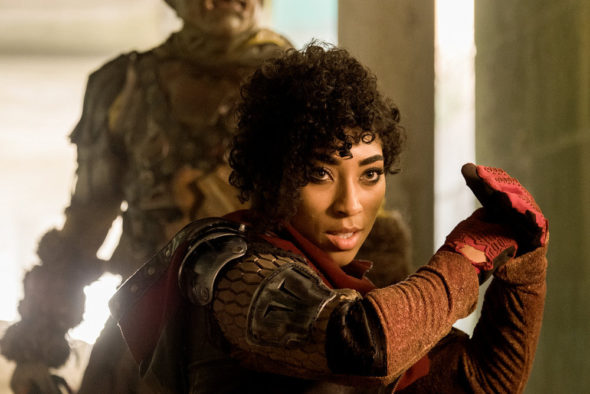 Can Elida go home again — and survive? Has the Vagrant Queen TV show been cancelled or renewed for a second season on Syfy? The television vulture is watching all the latest cancellation and renewal news, so this page is the place to track the status of Vagrant Queen, season two. Bookmark it, or subscribe for the latest updates. Remember, the television vulture is watching your shows. Are you?

Airing on the Syfy cable channel, Vagrant Queen stars Adriyan Rae, Tim Rozon, Alex McGregor, and Paul du Toit. The show revolves around Elida (Rae), a former queen turned scavenger who’s been on the run since her throne was stolen as a child. A charming old friend of Elida’s, Isaac (Rozon) shows up claiming that her mother, Xevelyn, is still alive. The two head off with their new ally, a skilled mechanic and pilot named Amae (McGregor), to stage a rescue that will take Elida back into the perilous heart of her former kingdom and up against a deadly foe from her childhood — ruthless and power-hungry Commander Lazaro (du Toit).

The first season of Vagrant Queen averaged a 0.05 rating in the 18-49 demographic and 224,000 viewers. Find out how Vagrant Queen stacks up against other Syfy TV shows.

Will Syfy cancel or renew Vagrant Queen for season two? Most of Syfy’s scripted series have been cancelled so, the channel has very few of them left. Despite low ratings, I thought it would be renewed. The move to Thursdays at 11 PM is a cause for concern.  I’ll update this page with breaking developments. Subscribe for free alerts on Vagrant Queen cancellation or renewal news.

6/27/20 update: Vagrant Queen has been cancelled so, there won’t be a second season.

What do you think? Were you hoping that the Vagrant Queen TV show would be renewed for a second season? Are you sorry that Syfy cancelled this TV series, instead?

I’m a little late to the show as I wrote it off for a while but I finally got around to watching it and I LOVE IT! Now I’m near heartbroken that it’s been canceled. Please SYFY! Please give it another chance! We need more fun quirky scifi action! We need more Vagrant Queen!

I agree with other commenters that this show is incredibly camp. That is its charm. Like the old fashioned science fiction TV shows of the past, it has charmingly quirky and imperfect characters traveling from strange planet full of strange creatures to another. I hope it is renewed because it really hits the spot for fun entertainment. Put it in a decent time slot and you will get the demographics you want SyFy TV. At 11pm most teens are in bed dummies.

fire the writers asap it needs to be rewritten. the dialog is juvenile the “actors /acting” is absolutely atrocious they don’t act they read lines do any of them have any experience or formal training not one gives believable performance as if they’ve never spent anytime finding the core of their character…possibly they just don’t understand that the dialog doesn’t fit the characters., Blame goes to the directors and shot layout did anyone actually draw up the story boards and shooting sequences? obviously the budget is minimal as the action scenes make apparent that the lead character has no concept… Read more »

I’m dating myself here, but as a kid, I enjoyed watching the antics of Flash Gordon and the other stupid sci-fi shows like it of the time. Vagrant Queen gives me that same fun nostalgia feel of yesteryear. It’s fun to watch, campy, yeah, but why not! I really hope it is renewed just to see how Elida handles her mother’s blatant betrayal and kidnapping Amay, unforgivable!

I’ve seen rumblings that this is not well liked but I absolutely adore this show! Its got an old skool type sci-fi vibe, a bit graphic in places but overall a fun ride with likeable and varied characters. I hope it gets another season, please, please, just give it a chance…..

Every time I enjoy a new show it cancels, leaves me hanging, pissed off, wanting more. I like this show, keep it going please!!!!

The Gun
Reply to  R Gulley

I think the show was great. A little campy, but entertaining. Only saw episode 2. Want to see more.