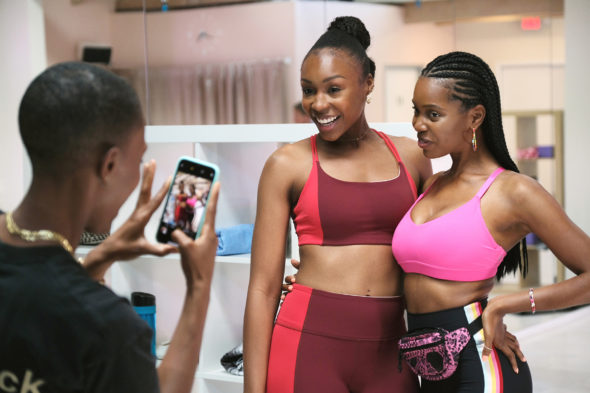 Will Hattie and her friends find their place in the spotlight in the first season of the Twenties TV show on BET? As we all know, the Nielsen ratings typically play a big role in determining whether a TV show like Twenties is cancelled or renewed for season two. Unfortunately, most of us do not live in Nielsen households. Because many viewers feel frustration when their viewing habits and opinions aren’t considered, we invite you to rate all of the first season episodes of Twenties here. *Status update below.

A BET A single-camera comedy series created by Lena Waithe, the Twenties TV show stars Christina Elmore, Gabrielle Graham, Jonica T. Gibbs, Sean “Big Sean” Anderson, Sophina Brown, and Jevon McFerrin. The series centers around a queer screenwriter named Hattie and her two straight girlfriends, Marie and Nia, as they all pursue their dreams and love in Los Angeles. After finding herself homeless and down on her luck, Hattie (Gibbs) is introduced to Ida B. (Brown), a powerful writer and producer who ends up having a soft spot for Hattie. She’s hired to work on Ida B.’s show, Cocoa’s Butter, as an assistant. New to Hollywood and stumbling from relationship to relationship, Hattie searches to find both her voice as a writer and, the right girl. Marie (Elmore) and her husband, Chuck (McFerrin), seemingly have a perfect relationship but, at work, Marie is pitted against the company’s only other black film executive for a promotion. Once a successful child performer, spirited Nia (Graham) is now a yoga instructor who decides to get back into acting. While they live separate lives, the girls lean on each other for guidance as they navigate their twenties.

What do you think? Which season one episodes of the Twenties TV series do you rate as wonderful, terrible, or somewhere between? Do you think that Twenties should be cancelled or renewed for a second season on BET? Don’t forget to vote, and share your thoughts, below.

*6/27/20 update: Twenties has been renewed for a second season on BET.

I love Twenties!!! Please renew the series. Brilliant actors and writing. Lena Waithe we all know is a genius. I particularly don’t watch much of BET because of all the commercials but I taped the series to watch. Amazing African American women talent. The show is hilarious, honest, spiritual, sensitive and brilliant!

I started watching after it had first aired. I liked it so much I had to go back and watch Episodes one and two. The characters are real and I appreciate the candid way the writer portrayed each one. From Hattie trying to find her way in Hollywood while keeping an upbeat to her situation to Ida B. who has found her way in Hollywood and is still searching for that silver lining. The beginning music sets the tone for each episode and the music selections through out gives the ambiance of new stuff and the traditional. Maybe I have… Read more »