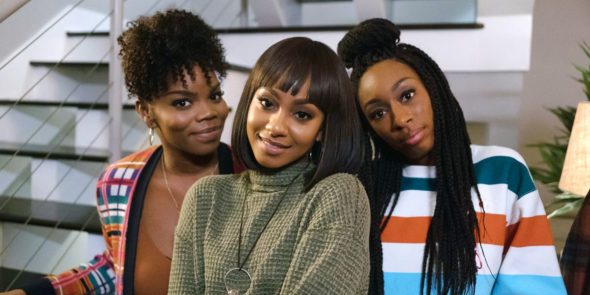 Is it any surprise that a TV show titled Boomerang is coming back? BET has announced that the serialized comedy series has been renewed for a second season. The show has been running on Tuesday nights and the first season finale airs next week, on April 9th. There’s no word on when season two of Boomerang will begin airing.

Boomerang stars Lala Milan, RJ Walker, Leland Martin, Tetona Jackson, Tequan Richmond, and Brittany Inge. From executive producers Halle Berry and Lena Waithe, the TV series is a sequel to the 1992 romantic comedy feature film of the same name, starring Eddie Murphy as Marcus Graham, Robin Givens as Jacqueline Broyer, and Berry as Angela Davis. The comedy follows Jacqueline’s son, Bryson (Richmond), and Marcus and Angela’s daughter, Simone (Jackson), as they try to forge a path outside the shadows their parents have cast and make their own way in the world.

The first season of Boomerang has been averaging a 0.13 rating in the 18-49 demographic and 402,000 viewers. The series has been paired with drama American Soul and that series has also been renewed for a second season.

Executive Produced by Emmy Award-winning actress, writer and creator Lena Waithe and Academy Award-winning actress, Halle Berry, “BOOMERANG,” is the #1 new cable scripted comedy for African Americans in the key 18-49 demo and AA2+*, and has been hailed as “emotionally searing” by The Hollywood Reporter. Produced by BET Networks and Paramount Television, the 10-episode series, picks up roughly twenty-five years after the iconic film, and centers on Simone Graham (daughter of Marcus Graham and Angela Lewis) and Bryson Broyer (son of Jaqueline Broyer), who are marketing professionals trying to step out of their parents’ shadows. “BOOMERANG” airs Tuesdays at 10 PM ET/PT on BET, with its season finale bowing Tuesday, April 9 at 10 PM ET/PT.

The penultimate episode penned by Waithe airs tonight, Tuesday, April 2, bringing her fresh take on a timely topic – #MeToo. “Us Too” explores what happens when notorious womanizer Marcus Graham (Eddie Murphy’s seminal character) is brought down by scandal. Over twenty years later, Marcus’ once charming hijinks land him in hot water and The Graham Agency is closed forever. The blowback is swift and his daughter and her squad are left to wonder what happens to *Us* after #MeToo? Exploring everyone from Bill Cosby to R. Kelly, “Us Too” is an honest and intimate look at all sides of the #MeToo movement from the black millennial perspective.

“Making Boomerang has been one of the highlights of my career and the positive feedback we’ve gotten from fans and critics has been so validating. I’m beyond excited to dive even deeper into these characters’ lives in season two,” said Executive Producer Waithe.

Executive Producer Halle Berry added, “I’m so proud of these young actors and the heart, depth and modern reality that they bring to this series. They are truly ambassadors of our culture and their generation.

“BET Networks is thrilled to partner once again with the creative visionary Lena Waithe on BOOMERANG as she is without a doubt a leading relevant voice of our generation and a disruptor in her own right,” said Connie Orlando, Head of Programming, BET Networks.

What do you think? Have you been watching the Boomerang TV show? Are you glad that BET renewed this series for a second season?

I loved this show!! Super excited for next season!!!

SOOOOO HYPE!!! I WAS HOLDING MY BREATH THE WHOLE TIME READING TO SEE IF A SECOND SEASON WAS COMING! I adore this show! Definitely thought I would hate it but still had high hopes! It ended up surpassing my expectations, so fresh and addicting! Please make it longerrrr, 30min just isn’t long enough!