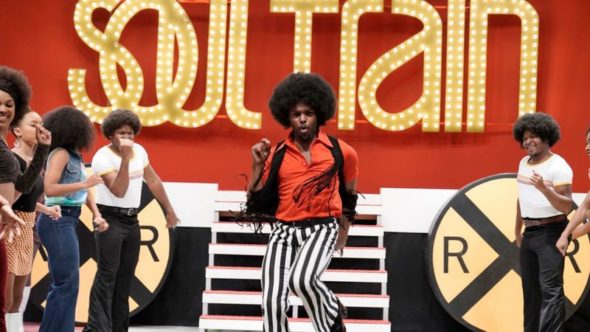 If you enjoy the American Soul TV show, this will be music to your ears. The BET cable channel has renewed the drama for a second season.

An original drama from creators Devon Gregory and Jonathan Price, American Soul stars Sinqua Walls, Kelly Price, Jason Dirden, Iantha Richardson, Katlyn Nichol, Jelani Winston, and Christopher Jefferson. The series blends fictional and real-life people, places and events, as it charts the rise of the cultural phenomenon of Soul Train. The story centers on creator and host Don Cornelius (Walls), and the Soul Train dancers, as they strive to make it in the racially charged Los Angeles of the ’70s.

The first season of American Soul has averaged a 0.17 rating in the 18-49 demographic and 594,000 viewers. The season concludes this evening and has been paired on Tueday nights with the Boomerang serialized comedy series (which has also been renewed).

Produced by Jesse Collins Entertainment, “AMERICAN SOUL,” is the #1 new cable scripted drama for African Americans 18-49 and AA2+*. The 10-episode series chronicles “the hippest trip in America” and what became of one of the most prominent and groundbreaking television shows for African-American culture. Hailed by Essence as “peak black excellence,” “AMERICAN SOUL” features a cast of multi-talented actors including Sinqua Walls (Power, The Breaks) who plays a young Don Cornelius. Series regulars also include Kelly Price (Grammy(R)-nominated singer), Jason Dirden (Greenleaf), Iantha Richardson (This Is Us), Christopher Jefferson, Katlyn Nichol, and Jelani Winston. “AMERICAN SOUL” airs Tuesday at 9 PM ET/PT on BET.

“We are incredibly grateful to continue to tell the American Soul story. Season one was so well received by the culture and we feel that season two will be even more fun and exciting,” said Jesse Collins, Executive Producer, “AMERICAN SOUL.”

“The partnership and creative trust of Tony Cornelius and everyone at Jesse Collins Entertainment resonated with audiences in a significant way and ensured AMERICAN SOUL’s success. BET Networks is invested in showcasing black excellence in our programming and we look forward to digging even deeper into the incredible legacy of Don Cornelius and Soul Train in season two.” said Connie Orlando, Head of Programming, BET Networks.

The season finale airing Tuesday, April 2 at 9 PM ET/PT features guest appearances by Gabrielle Dennis (Whitney Houston, “The Bobby Brown Story”) as Tina Turner and McKinley Freeman (BET’s “Hit the Floor”) as Ike Turner. As Encore achieves its greatest success, opening for Ike & Tina Turner, Simone, Kendall, and JT must reconcile their own lives before committing to the group. Meanwhile, Don secures a second season for Soul Train, and decides to focus on repairing his family but may find it’s too little, too late.

What do you think? Have you been watching the American Soul TV show? Are you glad that BET renewed this series for a second season?

I love the series please bring ltt back

The worst show ever! we all remember the dancing different dancers but what they did off the dance floor who cares. the writers for the show I understand what your doing but as people who was raised on the show ddt know these people personally so to do story lines on them was not what fans were looking to see. keep it the Don Cornelius life and the show cause everybody I talk to about the show say they lost interest because it moves around to much. I know im not looking forward to watching the new season.

I am so grateful that American Soil Train will be coming back on for the Year 2020.
Thank You

I just found the show yesterday and watched all of the episodes. It brought back many fond childhood memories of Saturdays. The music is amazing, the storyline is compelling. Please let JT live, I love his angst-ridden storyline. I can’t wait for season 2 to start.

When.is American Soul coming back. It is history that we get to share with the new generation. With life the way it is everyone deserves to take a peek into the hippest trip. It’s a chance for us to reminisce with our kids about when we were their age or younger. Family unity

SEASON 2—WHEN WILL IT AIR- — GREAT SHOW—BRINGS BACK GREAT MEMORIES FOR ME-LIFE B4 EMAILS TEXT MESSAGES CELL PHONES AND SOCIAL MEDIA!! — BLACK KIDS IN 70’s CAME UP WATCHING SOUL TRAIN-TO HAVE BEHIND THE SCENE STORIES IS A GREAT IDEAL!!

When is the Season 2 for American Sou starting? CAN’T WAIT!!!!l