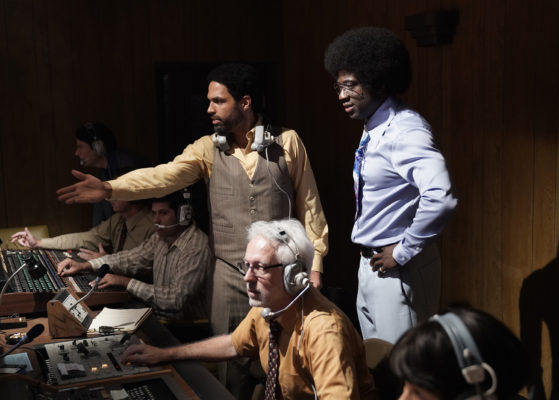 Is Soul Train still serving up love, peace, and soul? Has the American Soul TV show been cancelled or renewed for a second season on BET? The television vulture is watching all the latest cancellation and renewal news, so this page is the place to track the status of American Soul, season two. Bookmark it, or subscribe for the latest updates. Remember, the television vulture is watching your shows. Are you?

A BET original drama from creators Devon Gregory and Jonathan Price, American Soul stars Sinqua Walls, Kelly Price, Jason Dirden, Iantha Richardson, Katlyn Nichol, Jelani Winston, and Christopher Jefferson. The series blends fictional and real-life people, places and events, as it charts the rise of the cultural phenomenon of Soul Train. The story centers on creator and host Don Cornelius (Walls), and the Soul Train dancers, as they strive to make it in the racially charged Los Angeles of the ’70s.

The first season of American Soul averaged a 0.17 rating in the 18-49 demographic and 584,000 viewers. Check out the ratings of other scripted BET TV shows.

Will American Soul be cancelled or renewed for season two on BET? The series debuted with okay ratings but, because BET has few scripted projects these days, it’s difficult to know what they consider a success numbers-wise. I think it will be renewed but will keep an ear to the ground for news. Subscribe for free American Soul cancellation or renewal news alerts.

4/2/19 update: BET has renewed the American Soul TV show for a second season.

What do you think? Are you glad that the American Soul TV series has been renewed for a second season? How would you feel if BET had cancelled this TV show, instead?

Loved the show! Please bring the 2 season back!!!!

I was 18 when I came to this country, I will like to see soul train old programs reruns of it and all my kids and friends too, please have a program beginning with that music and introduce it to the now days music and ways of dancing . It will be a hit!! I’m sure.

Is Season 2 of Amican Soul coming back to my5? I live in the UK and loved season 1.

Our entire community has been speaking about American Soul. We are waiting for season two. Update me on when it will be shown again. We pray it’s not cancelled.

American Soul should be renewed. I’m looking forward to the next season.

American Soul should be renewed. It is a quality show with a lot of history of the original show.

Yes
Very happy that it was renewed
I’m interested in the story!!

Absolutely loved American Soul!!! Riveting entertaining and backdrop of what was really going on during that era enriches the storyline of Soul Train as just a venue for up and coming singers and groups in that decade
Brilliant parallels enriches story line
Loved the outside Character Nick I think his name was.,,his character should be developed
Talented

Yessss ma’am… American Soul is my Tuesday fix….Give me more…

Love American Soul, all the actors are are playing the he’ll out of their roles. Just a little sad that one character has been killed off, other then that the show is great.

Enjoyed AS tremendously! Yearning for more!
I hope Nick returns