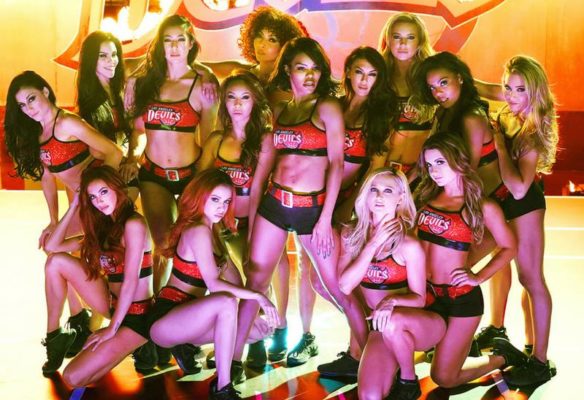 Is the game still on? Has the Hit the Floor TV show been cancelled or renewed for a fifth season on BET? The television vulture is watching all the latest cancellation and renewal news, so this page is the place to track the status of season five of Hit the Floor. Bookmark it, or subscribe for the latest updates. Remember, the television vulture is watching your shows. Are you?

The fourth season of Hit the Floor averaged a 0.15 rating in the 18-49 demographic and 383,000 viewers. Compared to season three, that’s down by 78% and 71%, respectively. Check out the ratings of other scripted BET TV shows.

Will BET cancel or renew Hit the Floor for season five? The ratings are way, way down from season three’s (which aired on VH1) and season four has a smaller episode order. Earlier this year, BET cancelled The Quad and that show had higher ratings. Personally, I think that it will be cancelled. I’ll update this page with breaking developments. Subscribe for free alerts on Hit the Floor cancellation or renewal news.

What do you think? Were you hoping that the Hit the Floor TV series would be renewed for a fifth season? Are you sorry that BET cancelled this TV show, instead?

Please bring hit the floor series back it’s a great show and I want to find out what’s next.

Please bring back Hit the Floor! Yes season 4 want that great but I read what James Larosa has planned for the old and new characters. The show was about to take off. It hasn’t been that long. Please pick it back up!

Bring Zero back, then ratings will climb again, and we’ll be able to see a lot more seasons. Team Zude!!

Please bring back hit the floor. We need to know what’s going to happen next. Please saved the show. There has to be another station that will want them.