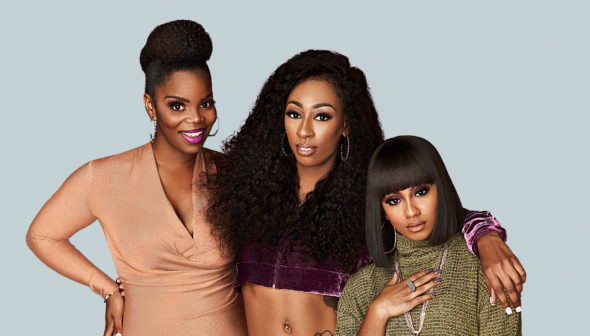 Will Bryson and Simone get a chance to make it on their own? Has the Boomerang TV show been cancelled or renewed for a second season on BET? The television vulture is watching all the latest cancellation and renewal news, so this page is the place to track the status of Boomerang, season two. Bookmark it, or subscribe for the latest updates. Remember, the television vulture is watching your shows. Are you?

Airing on the BET cable channel, Boomerang stars Lala Milan, RJ Walker, Leland Martin, Tetona Jackson, Tequan Richmond, and Brittany Inge. From executive producers Halle Berry and Lena Waithe, the TV series is a sequel to the 1992 romantic comedy feature film of the same name, starring Eddie Murphy as Marcus Graham, Robin Givens as Jacqueline Broyer, and Berry as Angela Davis. The comedy follows Jacqueline’s son, Bryson (Richmond), and Marcus and Angela’s daughter, Simone (Jackson), as they try to forge a path outside the shadows their parents have cast and make their own way in the world.

The first season of Boomerang averaged a 0.13 rating in the 18-49 demographic and 390,000 viewers. Check out the ratings of other scripted BET TV shows.

Will BET cancel or renew the Boomerang TV show for a second season? The ratings were mediocre and have dropped lower. The channel has few original scripted series so it’s a bit difficult to tell what they consider a success. For now, I think they’ll order season two. I’ll keep a hungry eye on the ratings and will update this page. Subscribe for free updates on Boomerang cancellation or renewal news.

4/2/19 update: BET has renewed their Boomerang TV show for a second season.

What do you think? Are you glad that the Boomerang TV series has been renewed for a second season? How would you feel if BET had cancelled this TV show, instead?