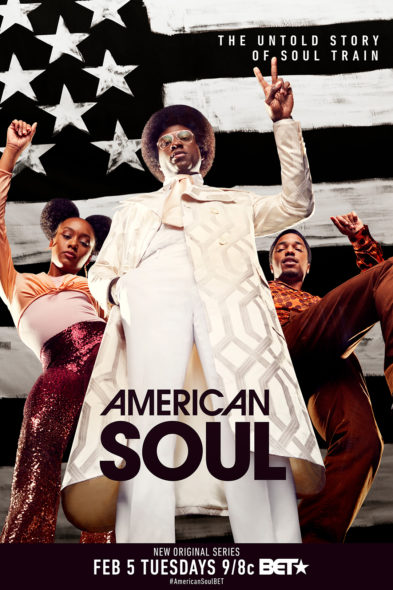 Are you digging the first season of the American Soul TV show on BET? As we all know, the Nielsen ratings typically play a big role in determining whether a TV show like American Soul is cancelled or renewed for season two. Unfortunately, most of us do not live in Nielsen households. Because many viewers feel frustration when their viewing habits and opinions aren’t considered, we’d like to offer you the chance to rate all of the American Soul season one episodes here. *Status update below.

A BET historical drama from creators Devon Gregory and Jonathan Price, American Soul stars Sinqua Walls, Kelly Price, Jason Dirden, Iantha Richardson, Katlyn Nichol, Jelani Winston, and Christopher Jefferson. The series blends fictional and real-life people, places and events, as it charts the rise of the cultural phenomenon of Soul Train. The story centers on creator and host Don Cornelius (Walls), and the Soul Train dancers, as they strive to make it in the racially charged Los Angeles of the 1970s.

What do you think? Which season one episodes of the American Soul TV series do you rate as wonderful, terrible, or somewhere between? Should BET cancel or renew American Soul for a second season? Don’t forget to vote, and share your thoughts, below.

*4/2/19 update: BET has renewed the American Soul TV show for a second season.

I hope “American Soul” runs as long as “The Simpsons”..

Spoiler Alert- should not let TJ die. Hope he makes his way out of that trunk. Binge watched the series this Saturday

I was just thinkin the same. Something tells me he will recover, or be found, & brought to the hospital before he dies..

I need this show to be RENEWED!! Don’t be playing with my emotions! I tune in every Tuesday waiting on the next episodes of American Soul and Boomerang! Let’s keep the soul going!

Come Thru Kalavesi!! I LIVE for my Tuesdays! American Soul and Boomerang is the Best Thing that happpened to Tuesday nights since…When Eva!!! I AM HERE FOR IT!!

I am enjoying American Soul I hope it gets renewed!!

Awesome show it is wonderful and depicts are community.

I could only last 20 minutes and then bye bye. Loved the story idea, but the feel and acting was at best average. Needed to be punched up a level.

If you grew up watch Soul Train then you would understand the television show.