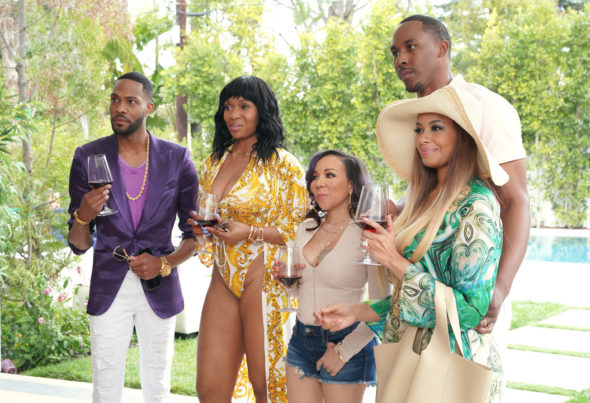 Games People Play will play on. The series has been renewed for a second season by BET. A premiere date for the series has not yet been announced. The cast for season two of the sexy drama will be announced at a later date as well.

Games People Play was a hit for BET. The series averaged 480,000 viewers during its first season. BET revealed more about the series in a press release:

“Today BET Networks announced the second season pick-up for its smart, sexy drama series GAMES PEOPLE PLAY. Starring Lauren London, Sarunas J. Jackson, Parker McKenna Posey, Karen Obilom and Jackie Long, season one of GAMES PEOPLE PLAY followed a desperate basketball wife trying to protect her family, a tenacious journalist struggling to rebuild a tarnished career, and a scandalous groupie looking to become a star, who all find it is murder trying to stay on top. In April 2019, fans were introduced to their newest guilty pleasure which left them at the edge of their seats every episode, culminating with the “killer” season one ending. Season two cast members will be announced at a later date.

“BET is home for lovers of black content that engages and entertains, and ‘GAMES PEOPLE PLAY’s first season over-delivered with a plotline that grips from episode one through the finale,” says Scott Mills, President of BET Networks. “Tracey Edmonds, Angela Burt-Murray and Vanessa Middleton have been great partners on GAMES PEOPLE PLAY and we’re proud to continue our relationship, bringing our viewers the compelling programming they expect from our brand.”

“We are thrilled to return and be able to give our fans more of the sexy, twisted, and unique storytelling that they enjoy and expect from every episode of GAMES PEOPLE PLAY,” says Tracey Edmonds, EP/CEO of Edmonds Entertainment. “Our characters will continue to surprise and ignite in season two. I am grateful to Scott Mills for his continued support of our show and its vision.”

GAMES PEOPLE PLAY reigned as the #1 new scripted cable series in FY19 among African-American 18-49 audience,* and has been hailed as the “perfect addition to your TV schedule” by Bustle. Based on the popular book by Angela Burt-Murray “Games Divas Play,” “GAMES PEOPLE PLAY” is a sexy, stylized drama about the L.A. high life, where everyone plays to win.

GAMES PEOPLE PLAY is executive produced by Tracey Edmonds of Edmonds Entertainment, Angela Burt-Murray and Vanessa Middleton. Middleton also serves as the showrunner on the series.”

What do you think? Are you a fan of this BET drama? Are you excited to see more Games People Play?

Love this show! I can’t wait until it comes back on. I know the pandemic probably is the reason season 2 hasn’t started

Games People Play is a hidden secret but I’m about to tell everyone. The last show I raved about was Bridgerton. I’m telling you, this is a hit!

Please bring back Games People Play it was a really good show.

Can’t wait for Games People’s Play Air Back On. Hurry Up And Give Us The Due Date when it starts for the Next Series.

I’m so excited that it’s coming back !! BET has some of the best shows !!! Thanks BET !! Can’t wait till Games People Play returns

I’m happy that it’s getting a second season! At first I was thinking it was cancelled since I haven’t heard anything about the show since the last episode but I’m glad it’s not cancelled

Games people play is awesome! I prayed for season two and my prayers have been answered. Thank you BET and the cast of Games People Play. You are fantastic!