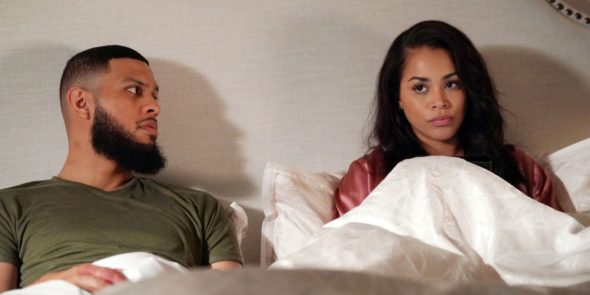 Are you game for the first season of the Games People Play TV show on BET? As we all know, the Nielsen ratings typically play a big role in determining whether a TV show like Games People Play is cancelled or renewed for season two. Unfortunately, most of us do not live in Nielsen households. Because many viewers feel frustration when their viewing habits and opinions aren’t considered, we’d like to offer you the chance to rate all of the Games People Play season one episodes here. *Status update below.

A BET drama based on the novel, Games Divas Play by Angela Burt-Murray, Games People Play stars Lauren London, Sarunas J. Jackson, Karen Obilom, Parker McKenna Posey and Jackie Long. The thriller centers on Vanessa King (London). Vanessa married her sweetheart, Marques (Jackson), when he was on the cusp of becoming a professional basketball player. Although he’s now a big star and Vanessa is a loyal wife, she has her doubts sometimes, and Marques isn’t immune to temptation. They’re surrounded by journalists, celebrities, groupies, and jealous old friends, playing a game where staying on top can be murder.

What do you think? Which season one episodes of the Games People Play TV series do you rate as wonderful, terrible, or somewhere between? Should BET cancel or renew Games People Play for a second season? Don’t forget to vote, and share your thoughts, below.

Games People Play is one of the best series!! I was watching another series on another channel, but I like this one better, and there is an opportunity of a second season!! So happy about that!!

Games People Plsy was a hilarious show and should be renewed ! Good acting and good show.

Renew the show.. Y’all always cancel the best shows..
This was a really good show.

Please renew, one of the best shows in a while on BET and ratings seem consistent.

RENEW THR SHOW!! It was different & it had different plots & twists i enjoyed it , RENEW RENEW DO NOT CANCEL ! Cancel all them other wack a$$ shows expect this one !!

it one kind of a movie with flowing unpredictable scripts.
loved the beautiful flow with the dhem beautiful gals in the world like nia, vannesa, her co-wife tho they made it on ohh my g have forgotten her name….deim
but i love the movie tho its gonna taka my girl away cos ov dem hundsome guys in it…

RENEW The Show it was SUPER GOOD

Renew I got home and was sad not to see it on tv what’s this tales ???? Bring it back