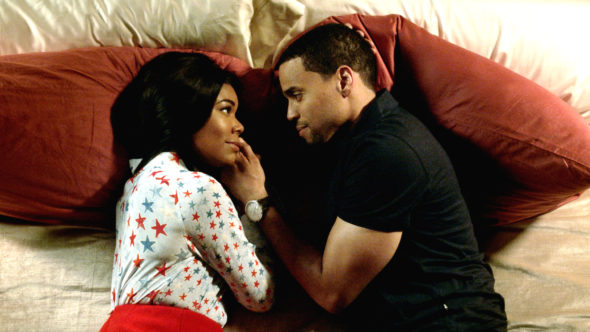 Well it seems we finally have the answer to that age-old question: to be, or not to be? While people can argue over whether it has been “cancelled,” the Being Mary Jane TV show is ending after four seasons on BET. Deadline reports the Network has ordered a two-hour movie, which will serve as the Being Mary Jane TV series finale, when it airs in 2018.

Airing on the BET cable channel, Being Mary Jane revolves around the life of news anchor, Mary Jane Paul (Gabrielle Union). Margaret Avery, Aaron D. Spears, Richard Brooks, BJ Britt Jr., Raven Goodwin, Richard Roundtree, Valarie Pettiford, Chike Okonkwo, and Michael Ealy also star. The cancellation or ending does not come as a huge shock. Originally, BET wanted to shoot seasons four and five back-to-back. Gabrielle Union fought that though, on the grounds of break stipulations in her contract. Although eventually, the lawsuit was settled, there was no further mention of a Being Mary Jane season five renewal. What’s more, the ratings were way down during what is now this TV show’s fourth and finale season.

Being Mary Jane: A Look at the Ratings

The fourth season of Being Mary Jane averaged a 0.36 rating in the 18-49 demographic and 860,000 viewers. Compared to last year, it was down by 51% and 47%, respectively. Learn how Being Mary Jane stacks up against other BET TV shows.

BET on the End of Being Mary Jane

“Being Mary Jane has been a landmark series not only for BET, but for African American women around the world who saw themselves in Mary Jane, her family, friends and coworkers. From the captivating storytelling, to the richly complex characters, to the powerful issues tackled on the series, we remain immensely proud,” said Connie Orlando, EVP and Head of Programming, BET Networks. “We are grateful to the cast and creators of Being Mary Jane, who have worked tirelessly to bring this world to vivid life over the past 4 seasons. We also thank the many loyal viewers whose hearts and minds were captured every week, and kept Mary Jane trending worldwide. We look forward to closing out Mary Jane’s journey with a series finale that is sure to blow fans away!”

What do you think? Are you a fan of the Being Mary Jane TV show? Is this TV series ending at the right time? Should BET have cancelled or renewed for season five? Let us know, below.

PLEASE continue with being Mary Jane!! That show is so amazing and gave me life throughout all of it. It’s one of those shows that just pulls on your emotion strings and gets you connected with the show. I loved watching and enjoying every single episode and I wish you would continue it for all of us please 🙁

I totally agree, Being Mary Jane showed how complex our characters are and every day struggles that we have in our family without showing Black people as having to be ghetto or broke. And it is Grown and Sexy. I Love this show…PLEASE let it continue.

Being Mary Jane needs to continue.. a petition should go around to renew the series. #ilovebeingmaryjane. Bring it back

I would sign it! PLEASE bring it back!!!
#ilovebeingmaryjane