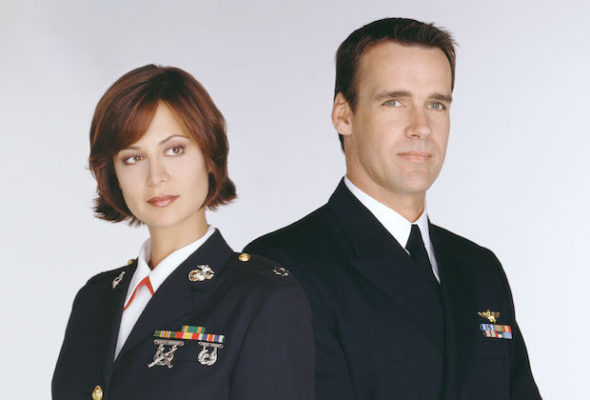 Another JAG star is returning to CBS. Deadline reports Catherine Bell will join her join her co-star David James Elliott on an upcoming episode of NCIS: Los Angeles.

On NCIS: Los Angeles, Bell will resume her JAG role alongside David James Elliott. The two are expected to recur on the CBS series’ 10th season later this spring. As fan of NCIS will know, the franchise was originally a spinoff of JAG.

In the episode, as the NCIS team tries to uncover a complicated network of ISIS sympathizers who look to be planning an attack on US aircraft carriers and possible worse, Hetty (Linda Hunt) has to call in a favor to an old friend, Lieutenant Colonel Sarah “Mac” MacKenzie (Bell), to help get access to an elusive Russian diplomat.”

What do you think? Have you seen JAG? Do you watch NCIS: Los Angeles?

Looking forward to it. Maybe another spin-off in the works? Couldn’t do much better than having those two paired up on-screen again.

I love the JAG series and bought it also. NCIS LA is my favourite of the NCIS shows.

How exciting. Loved JAB and both actors. Will be great to see them on NCIS.

Yes I watched all of Jag, and watch all 3 NCIS’s. Love them all

I love NCIS Los Angeles and Jag. I hope that NCIS Los Angeles stays on longer than Jag did. Actually the best thing would be to keep NCIS Los Angeles on and to also bring Jag back. Of course David James Elliott and Catherine Bell would have to be the headliners of that show as they were before.