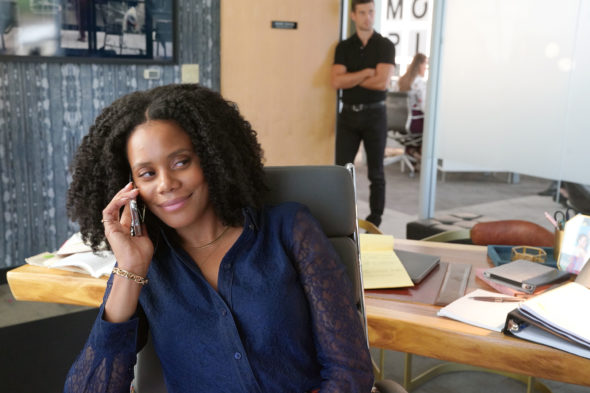 Is Hattie ready for Hollywood or, more likely, is Hollywood ready for Hattie?  Has the Twenties TV show been cancelled or renewed for a second season on BET? The television vulture is watching all the latest cancellation and renewal news, so this page is the place to track the status of Twenties, season two. Bookmark it, or subscribe for the latest updates. Remember, the television vulture is watching your shows. Are you?

Airing on the BET cable channel, the Twenties TV show is a single-camera comedy series created by Lena Waithe. It stars Christina Elmore, Gabrielle Graham, Jonica T. Gibbs, Sean “Big Sean” Anderson, Sophina Brown, and Jevon McFerrin. The series centers around a queer screenwriter named Hattie and her two straight girlfriends, Marie and Nia, as they all pursue their dreams and love in Los Angeles. After finding herself homeless and down on her luck, Hattie (Gibbs) is introduced to Ida B. (Brown), a powerful writer and producer who ends up having a soft spot for Hattie. She’s hired to work on Ida B.’s show, Cocoa’s Butter, as an assistant. New to Hollywood and stumbling from relationship to relationship, Hattie searches to find both her voice as a writer and, the right girl. Marie (Elmore) and her husband, Chuck (McFerrin), seemingly have a perfect relationship but, at work, Marie is pitted against the company’s only other black film executive for a promotion. Once a successful child performer, spirited Nia (Graham) is now a yoga instructor who decides to get back into acting. While they live separate lives, the girls lean on each other for guidance as they navigate their twenties.

The first season of Twenties averaged a 0.14 rating in the 18-49 demographic and 510,000 viewers. Find out how Twenties stacks up against other BET TV shows.

Will BET cancel or renew Twenties for season two? Though the ratings could be stronger, I believe that BET will renew Waite’s show for a second year. I’ll update this page with breaking developments. Subscribe for free alerts on Twenties cancellation or renewal news.

6/27/20 update: Twenties has been renewed for a second season.

What do you think? Are you glad the Twenties TV show has been renewed for a second season? How would you feel if BET had cancelled this TV series, instead?

Really need Twenties to come back on for a second season. Definitely need to see where this goes.

I live the show and can’t wait for season two.

Hey I love this show foreal! I want see where the ended goes after that kiss though!!