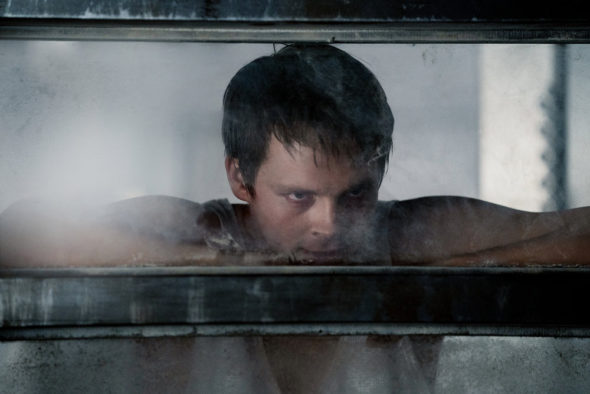 A Syfy psychological thriller from showrunner Jeff Buhler, Nightflyers is based on a novella and short stories collection from Game of Thrones‘ George R. R. Martin. The cast includes Gretchen Mol, Eoin Macken, David Ajala, Sam Strike, Maya Eshet, Angus Sampson, Jodie Turner-Smith, Phillip Rhys, Gwynne McElveen, Brían F. O’Byrne, Bronte Carmichael, and Miranda Raison. Set in 2093, the story centers on the passengers and crew of the advanced spacecraft, The Nightflyer, which embarks on a mission to make contact with a mysterious alien at the edge of our solar system, with the help of a lethal L-1 empath.

The first season of Nightflyers averaged a 0.09 rating in the 18-49 demographic and 395,000 viewers. Find out how Nightflyers stacks up against the other Syfy TV shows.

Will Syfy cancel or renew Nightflyers for season two? My hungry gut says that since this series is based on the works of Game of Thrones author George R.R. Martin, the channel will want to order a second season. It may be a one-and-done series however so, we’ll have to wait and see. I’ll update this page with any news. Subscribe for free Nightflyers cancellation and renewal alerts.

2/19/19 update: Syfy has cancelled Nightflyers so there won’t be a second season.

What do you think? Were you hoping that the Nightflyers TV show would be renewed for a second season? Are you sorry that Syfy cancelled this TV series, instead?

It was awsome, love the whole off season 1 cannot wait too see season two 5 stars from me

This show is off the hook awesome! I downloaded the whole series to my DVR and watched it all in 2 days, and there wasn’t a second that I wasn’t like gobsmacked, as my Bristish Father would say… It’s the best sci fi series I have ever seen, by a long shot. Super exciting and the effect are off the hook cabs it’s kike X-men meets a super dark version of Star Trek. I love it!

The plot seemed confusing at first and, since the general viewing audience – especially critics- have little patience and less adventure, I understand why they were skeptical. By episode 5 things started to reveal themselves nicely and by the finale had woven a tapestry worthy of interest and had me hooked.
Renewal is not only recommended but demanded. Too many promising shows end unresolved. Don’t cave to the critics. RENEW!

Here’s hoping that nightflyers has a season 2.
Season 1 was incredible.
Please please please.

Hell yes season 1 was awesome and left us hanging till the 2nd season people were trash talking it before it even came out shame on them. Please Renew!