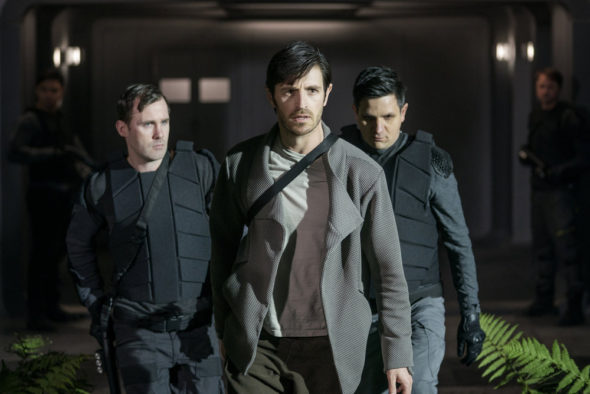 Is the Nightflyer crew on target during the first season of the Nightflyers TV show on Syfy? As we all know, the Nielsen ratings typically play a big role in determining whether a TV show like Nightflyers is cancelled or renewed for season two. Unfortunately, most of us do not live in Nielsen households. Because many viewers feel frustration when their viewing habits and opinions aren’t considered, we’d like to offer you the chance to rate all of the Nightflyers season one episodes here. *Status update below.

A Syfy psychological thriller from showrunner Jeff Buhler, Nightflyers is based on a novella and short stories collection from Game of Thrones‘ George R. R. Martin. The cast includes Gretchen Mol, Eoin Macken, David Ajala, Sam Strike, Maya Eshet, Angus Sampson, Jodie Turner-Smith, Phillip Rhys, Gwynne McElveen, Brían F. O’Byrne, Bronte Carmichael, and Miranda Raison. Set in 2093, the story centers on the passengers and crew of the advanced spacecraft, The Nightflyer, which embarks on a mission to make contact with a mysterious alien at the edge of our solar system, with the help of a lethal L-1 empath.

What do you think? Which season one episodes of the Nightflyers TV series do you rate as wonderful, terrible, or somewhere between? Should Syfy cancel or renew Nightflyers for a second season? Don’t forget to vote, and share your thoughts, below.

*2/19/19 update: Syfy has cancelled Nightflyers so there won’t be a second season.

This is very sad, because I actually thought it was one of the best series SyFy and Netflix had produced lately. Completely in the style of Stargate Universe and Event Horizon, what I consider a plus point. Pure for the SF fanatic. The other day they had cancelled ‘The Expanse’. It looks like if Netflix is growing a bit of a dislike towards the SciFi fans. Nothing meaningful hop-flop-I-love-you-teen-dramas are continued into eternity, and this kind of series are cancelled after 1 season. And so there are countless series with “there is only 1 season with a open end” available… Read more »

Defiantly need a series 2. It was a very good series somewhat dijointed in parts but very good. Far to many questions to end at series 1, almost as good as the expanse!

Loved the show, always looking for new, good sci-fi. Too many possibilities and cool things to be done with story, and characters, to not do a second season. Really hope it flies. It would be ashamed to not give it a season or two to develop.

Love. What an Amazing show!! Please make my year and continue Nightflyers.

Totally hooked! A+++ Please bring on Season 2. And Eoin Macken is awesome!!!

I agree wholeheartedly with everyone else!!! When I first started watching, I thought it was really weird; but now I am hooked on it! Too many things went unanswered! Better be a Season 2!!!

Watching Nightflyers was like being on THE BEST roller coaster ever made! It had all the elements of a great sci fi show with a bit of horror on the side. It is based on a George R.R. Martin (Game of Thrones) short story. We binged Nightflyers on the Syfy Channel in about a week which was a brilliant move because it was almost like binging in Netflix. It was up there with one of the best shows SyFy has ever put on. The cast was a mixture of Brits, Canadians, and American actors who were superb. The ending was,… Read more »

Everything was left up in the air..what happens to the crew etc? What about the alien contact? Too much cliffhanger to just leave it at that. Need a season 2!

This was a great experience, I’m hoping for a season 2 to see what happens next. It’s frustrating when a show like this gets to this point and ends, like the whole show season is getting to the planet ok, then what. Thats been the way 95% of Syfy movis go, let’s see what happens after they get their. Clearly the second best show from Syfy After ‘SG1′ It’s also funny how Syfy will spend the $$ for great shows but when it come to their movies lol the quality is less than B rated. So my hat off too… Read more »

I have been watching Nightflyers and I am hooked. Please bring it back for another Season.

There better be a season 2… This show is too good.