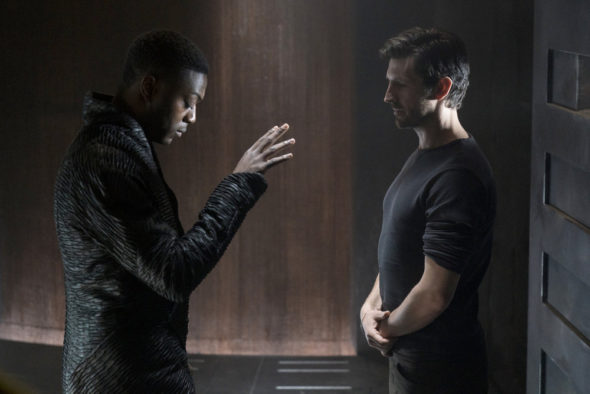 TV show description:
From showrunner Jeff Buhler, the Nightflyers TV show is based on the George R. R. Martin novella and short-story collection of the same name. The science-fiction horror series centers on the passengers and crew of the advanced spacecraft, The Nightflyer.

Despite the risks involved, in 2093, a team of scientists sets out to make contact with mysterious alien life at the outer reachers of our solar system. Along with a powerful telepath, the crew boards The Nightflyer, for their ambitious expedition.

From his perch atop the powerful Eris corporation, Roy Eris (Ajala) oversees the solar system’s number one builder of off-world colonies. As the captain of the Nightflyer, Eris is a solitary soul, who relies on technology to communicate with his crew. He spends most of his time on his private deck, which is also home to a dangerous secret.

Roy’s chief engineer is Auggie (O’Bryne), an experienced veteran whose loyalties lie with his captain. He is ready to follow any order Eris issues — no matter what.

Lommie (Eshet) is a gender-fluid cyber technician and would rather spend her time with computers than with other people. With help of the Neuro-Port implanted in her arm, she “melds” with The Nightflyer’s computer system, in a practice called “porting,” which really gives her a charge.

The strong, handsome astrophysicist heading up the scientific expedition, Karl D’Branin (Macken) seems like a confident man. His staff includes Rowan (Sampson), a xeno-biologist who has some deep concerns that this mission could endanger the human race, but he is still willing to put his life on the line to complete it.

Brilliant and beautiful, Melantha Jhirl (Turner-Smith) is D’Branin’s first officer. As an “enhanced” cadet from the Genetic Space Program, the athletic Melantha is dedicated to serving Karl, at least until she catches Roy’s attention.

A stunning psychiatrist specializing in L-1 telepaths, Dr. Agatha Matheson (Mol) is truly fearful of space travel. Still, she joins The Nightflyer mission, in order to protect an L-1 from the vessel’s suspicious crew.

Thale (Strike) is that L-1. The rare young man possesses the lethal psychic power which could prove valuable on this mission. Should The Nightflyer make contact with the mysterious alien life it is pursuing, he may be able to communicate with it. For now though, he’s flying under sedation. .

As The Nightflyer heads off toward its target, it starts to experience violent and terrifying events. Soon, the once close crew starts to lose faith in one another, even though their mission may soon amount to survival.

Series Finale:
Episode #10 — All That We Have Found
New orders leave the Nightflyer and its passengers hanging in the balance.
First aired: December 13, 2018.

What do you think? Do you like the Nightflyers TV series? Should this Syfy TV show have been cancelled or renewed for a second season?

Simply said, ‘You can not cancel a series like Nightflyers without ending it first. We haven’t even seen the aliens yet only some tennicles. Come on just play a new season so we can get closure.