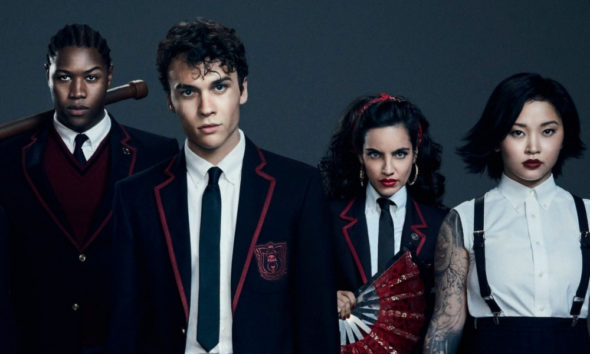 This class is dismissed. Syfy has decided to cancel the Deadly Class TV show so there won’t be a second season. The defacto series finale aired on March 20th.

A coming-of-age thriller, Deadly Class stars Benjamin Wadsworth, Benedict Wong, Lana Condor, María Gabriela de Faría, Luke Tennie, Liam James, and Michel Duval. Set in the counterculture of the 1980s, the drama centers on Marcus Lopez Arguello (Wadsworth), a street kid who is recruited into Kings Dominion, a private academy. The twist is, this elite school is the top choice among the world’s premier crime families.

The first season of Deadly Class averaged a 0.14 rating in the 18-49 demographic and 396,000 viewers. It was Syfy’s third-highest rated series in the demo (live+same day) and sixth in viewership. Why was the show cancelled?

The series is a co-production of Universal Content Productions (owned by NBCUniversal, which owns Syfy) and Sony TV. Reportedly, the co-ownership of the series complicated a renewal and Sony TV didn’t sell the backend rights so there wasn’t a streaming deal in place to help offset the cost of making Deadly Class. Word is that Sony will still try to find a new home for the show.

Syfy has also cancelled the Happy! TV show. The cable channel appears to be cleaning house as Nightflyers, Channel Zero, and Killjoys (final season starts July 19th) have all been cancelled.

What do you think? Do you like the Deadly Class TV show? Should this Syfy TV show have been cancelled or renewed for a second season?

I was looking forward to a season 2. Terribly disappointed.

Love the show you would be idiots to take it off the air. Best show I have seen on tv in years!! If syfi doesn’t renew it for 2nd season hope another network picks it up. So syfi will see what a mistake they made by not giving them another season!!!

Fraggin’ SyFy. “Let’s cancel all our best shows to save money” just dumb. Don’t greenlight a show if you don’t want to pay enough for it to be any good.

Boo! I loved this show! I looked forward to each episode. It was so good. The storyline was great, and I couldn’t wait to see what happens next.

It was a show that began and ended well but with too much mess and confusion in the middle.

oh man Samuel Carr I hope you’re right I really loved this show ! 🙁 … another case of a great series dying because viewers don’t know a good show when they see it and don’t tune in to watch.. grrr…

I am disappointed that Scyfy has cancelled deadly Class, but this has become part of who they have become. I do not think I will invest anymore time or effort in watching any series that they make ever again this ends a long list of their bad decisions(Being Human, Lost Girl, Legion, etc.) I have no intention of getting burned again. Hopefully, some other network that doesn’t have the brains of a bedbug will pick it up.

We really liked Deadly Class; sorry to hear it won’t be back. Hopefully, someone with common sense will pick it up!

I thought Deadly Class was renewed! BUMMER! Add this to the list of questionable SYFY cancellations along with Dark Matters, and the Expanse. The powers that be had more programming sense when they called themselves the Sci-Fi Channel.

Loved the show, i will miss it. Lots of killing. Syfy cans everything that i like.

“Word is that Sony will still try to find a new home for the show.”

@Netflix hopefully. Seems like a good fit for the recent teen series they have been pumping out.