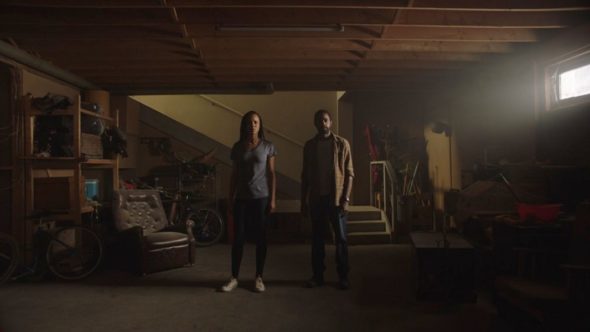 Has Syfy closed the door on creepypasta stories? Is the Channel Zero TV show cancelled or renewed for a fifth season on Syfy? The television vulture is watching all the latest cancellation and renewal news, so this page is the place to track the status of Channel Zero, season five. Bookmark it, or subscribe for the latest updates. Remember, the television vulture is watching your shows. Are you?

A Syfy horror anthology, each season of Channel Zero tells a new story featuring different characters. Season four, The Dream Door, stars Brandon Scott, Maria Sten, Steven Robertson, Steven Weber, and Barbara Crampton. Based on Charlotte Bywater’s creepypasta, “Hidden Door,” this installment follows newlyweds Jillian (Sten) and Tom (Scott), who have each brought secrets into their marriage. When they discover a strange door in their basement, those secrets start to threaten their relationship — and their lives.

The fourth season of Channel Zero averaged a 0.07 rating in the 18-49 demographic and 265,000 viewers. Compared to season three (Butcher’s Block), that’s down by 20% and 14%, respectively. Find out how Channel Zero stacks up against the other Syfy TV shows.

Will Syfy cancel or renew Channel Zero for season five? I think it is likely to be cancelled, unless the show is just dirt cheap to make. I’ll update this page with breaking developments. Subscribe for free Channel Zero cancellation and renewal alerts.

1/16/19 update: Syfy has cancelled the Channel Zero TV show so there won’t be a fifth season.

What do you think? Were you hoping that the Channel Zero TV show would be renewed for a fifth season? Are you sorry that Syfy cancelled this TV series, instead?

SyFy execs have got to be the stupidest bunch of idiots known to man! They have canceled SO MANY great shows, like Warehouse 13, Eureka, The Expanse, etc., etc., etc. Dummies … always cutting their own throats.

I really miss “Channel Zero” please bring it back. It was new odd and fresh Ideas of horror. You messed up by canceling a new vibe of horror… What were you thinking SCIFI?

I luv Channel Zero, and such TV series, because they make u think and escape from the stupid idiotic human RL world, that we all have to deal with. I have been watching it, HAPPY!, and AHS from the start and always enjoy them. I remember back when SYFY channel, was SYfy channel. showing actual syfy movies and actual syfy tv series. no a days its all reality tv series, like faceoff and such. GRRRR.

Please continue this show i have been watching it from the beginning. My husband and I love it. Everytime they play reruns like they are right now we wach them . please don’t let it be the end i mean it sucks cause all the good shows stop and all the stupid ones stay..

This show is so original and mind blowing.
I’ve enjoyed each one. They are so mentally and emotionally deep. Please make more.
I think you need to advertise more. I didn’t know about any of them until this season’s ,
“Dream Door”
Whoever came up with this is amazing.
I am a big fan of the series, “American Horror Story.”
I didn’t think anything could come close to that.
I will help get the word out on Facebook. I am now a new fan of Channel Zero.

I have followed these storys when they were featured on creepy pasta. Though it was probably my most anticipated season due to the stories on creepy pasta, I was not impressed with the butchers block. I feel like alot of viewers left after that. No-end house is still the best one for sure. Dream door was interesting though and I did enjoy it. There were almost no advertisements. I heard about each season omly once. Had to look up the rest.