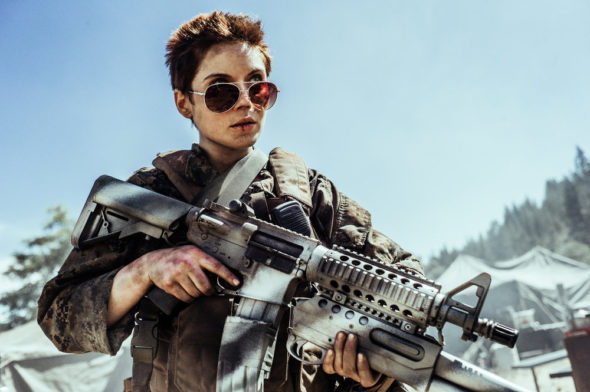 Have Lieutenant Warren and her team of heroes succumbed to the zombie apocalypse? Is the Z Nation TV show cancelled or renewed for a fifth season on Syfy? The television vulture is watching all the latest cancellation and renewal news, so this page is the place to track the status of Z Nation, season five. Bookmark it, or subscribe for the latest updates. Remember, the television vulture is watching your shows. Are you?

A horror dramedy on the Syfy cable channel, Z Nation stars Kellita Smith, DJ Qualls, Keith Allan, Anastasia Baranova, Russell Hodgkinson, Nat Zang, Joseph Gatt, Emilio Rivera, and Matt Cedeño. After a zombie virus infects the United States, a ragtag gang of everyday people bands together to end it. In the fourth season, they find themselves in the midst of an even worse “Zompocalypse.” Among the foes they must face are Jugalo Zombies. They also need to locate the Zombified President of the United States – or at least his thumb.

The fourth season of Z Nation averaged a 0.17 rating in the 18-49 demographic and 589,000 viewers. Compared to season three, that’s down by 32% and down by 32%, respectively. Find out how Z Nation stacks up against the other Syfy TV shows.

The fourth installment premiered with much weaker numbers than last year and the ratings are way down. Still, Z Nation continues to be one of Syfy’s highest-rated shows. I suspect that they’ll renew it but the cable channel execs could easily cancel it too. I’ll keep an eye on the ratings and update this page with breaking developments. Subscribe for free updates on any Z Nation cancellation or renewal news.

What do you think? Do you hope the Z Nation TV show will be renewed for a fifth season? How would you feel if Syfy cancelled this TV series, instead?

So has season 5 been aired or what?

I Love Z Nation! You cancel this show and I will start my own darn Zombie Apocalypse!

I love z nation. I will cry and be sad if my main man Murphy don’t come back. I’m begging and pleading to network to NOT CANCEl MY FAV SHOW Z NATION…there’s other shows that you can cancel that have low ratings …Z isn’t one of them since it TOTALLY ROCKS

A hugh sigh of relief on the news of it’s renewal!!! Bring on season 5! I bing watch (Hulu, Netflix) and was so upset on how it ended – you can’t leave us hanging that way! You have my attention!

Guys. I have to say it. You cant cancel the Z nation. I can only dream of season 6 because this show is amazing but pls finish season 5. Even when you know you will earn less money dont do it for money. Any way you will earn good cash so what a reason not to do it. Fans want this show. Damn it. I really like Murphy. He is one of the best characters. I remember when he became very important person called The Murphy. do you not remember that time at the strip club. He was so funny… Read more »

I sincerely hope they go for season 5. This show is fun, entertaining and the characters are really good.. of course its a bit crazy but thats ok…it is supposed to bet. The humor is really well done. Bravo…i will not miss season 5 nor will the other fans!

PLEASE DO ANOTHER SEASONS….AND PERHAPS A GOOD ENDING!! THIS IS THE BEST ZOMBIE FILM IVE EVER WATCHED!! IM BEGGING YOU TO THIS CREATOR..DO MORE FILMS! I LOVE HOW ADDY, DOC, TOMMY (JEFF OR 10K), SUN MEI, MURPHY,ROBERTA WARREN, AND OTHER TEAM UNITE. PLEASE DONT END OR CANCEL THE FILM 🙁 WE LOVE ZNATION!!!!!!

Z Nation is one the most thrilling shows, I watched. It has some black humor which adds to the drama. I am one of many in my family whose hooked on this series. Hope it keeps renewing each season.

I love this show. I even watch past seasons . Renew please . Fan from Canada

They better get season 5 on its way fast. I don’t know how much longer I can hold off with not knowing what happens

I love love love Z Nation just as much as the walking dead! I want more!!! My kids and I love Friday nights it’s become family time for us. We never want it to end! We laugh, we cry, and we cheer. Can’t wait to see what the writers come up with next.

Walking Dead is nothing compared to Z Nation.
Was hooked on Z from day 1 while Walking Dead went down hill fast once it got away from the zombies and got more into the drama