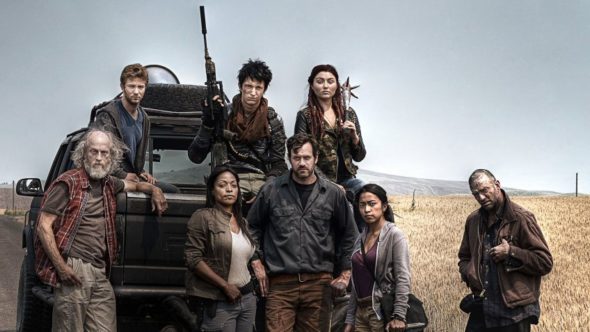 Z Nation has been a solid performer for Syfy over the past four seasons. Its fourth season, which wraps tonight, December 15th, at 9 p.m. ET/PT, is currently averaging a .17 rating in the 18-49 demo and 591,000 viewers. The numbers seem low, but there series is actually one of Syfy’s top five-rated shows for the 2017-2018 season.

THANK YOU #ZNATION FANS – WE'VE BEEN RENEWED FOR A 5TH SEASON!
How could @SYFY say no? #ITSAFANTHING !
Cast & Crew: See you on the set in 2018!
To All: Enjoy tonight's 2 HOUR SEASON FINALE & #LiveTweet with us! Z Giveaways!@theasylumcc @unrealkarl @craigengler pic.twitter.com/d55xb8xs5h

This is not Z end. #ZNation has been renewed for Season 5! pic.twitter.com/6DZ0N9Sdsb

Thank you fans for all the support and hard work getting Z Nation renewed. WE HAVE THE BEST FANS. Our crew is not too shabby either #znation

What do you think? Do you watch Z Nation? Are you glad it’s been renewed?

I been obsessed with this show since the first season! I’m honestly so excited for the 5th season! I was really hoping that you guys were gonna make a 5th season and I got my wish!

Love the show. So happy it is coming back.

Love the series! Different approach! Very excited about series 5! When will series 5 air on Syfy?

I love this show one of my favorite’s next to Walking Dead. Thank you for renewing and giving us a Season 5. Looking forward to see what’s next for the group!

Javier killed Hector when they went looking for the red hand

I love this show. I am a huge fan of the zombie genre so I also watch TWD on AMC and iZombie on the CW. I actually like Z Nation more than TWD. Z Nation has alot more action and the plot moves much quicker while at the same time it has lots of drama and you can make a connection with the characters. In short it is all that and a bag of chips. I feel like the person that wrote this article does not actually watch the show. They mention who will be in the season 5 cast.… Read more »

OMG! Been waiting for this news! LOVE this show!

Have watched from the very beginning. I live in Spokane so it’s fun to try to figure out where some of the places are. Yea for the Season 5 renewal. Z, keep on coming.

and the Z goes on…

When is season 5 gonna get here….I can’t wait any longer lol

I love the show and characters. I’m so happy it’s still airing vs. leaving us in Limbo. AWESOME show.

Love this show and always look forward to the next season . However, the once funny and kind of light hearted look of the show went dark in season four. Please lighten up!

Yea!! One of my favorite shows. Cannot wait for season 5. See where the threads from season four take us!