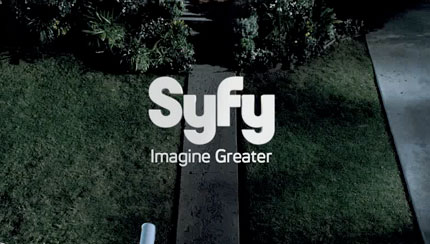 If the popularity of The Walking Dead is any indication, Zombies are still all the rage. Now, Syfy is getting into the act. The cable channel has ordered a new TV series called Z Nation and the 13 episode first season is expected to premiere this fall.

NEW YORK – April 7, 2014 – Syfy today announced Z Nation, a 13-episode zombie series set to debut in the fall. From production company The Asylum (Sharknado), the action-horror series depicts the epic struggle to save humanity after a zombie apocalypse. The series, which will air on Syfy, will be produced by The Asylum and sold internationally by Dynamic Television.

Karl Schaefer (Eerie Indiana, Eureka, The Dead Zone) will serve as executive producer and showrunner. “Z Nation will take viewers where no zombie has gone before,” says Schaefer. The show, he continues, adds “a sense of hope to the horror of the apocalypse – our everyday heroes take the fight to the zombies. It’ll be an epic journey unlike anything you’ve seen before.”

In making the announcement, Chris Regina, Senior Vice President, Programming, Syfy, said: “Z Nation is a unique new journey into the long established zombie genre. Instead of existential despair, the series offers hope that somehow, some way, humanity will not only survive, but triumph. In producing their first ever weekly series, our long-time partners The Asylum have created a different way of telling an iconic story.”

In Z Nation, three years have passed since the zombie virus has gutted the country, and a team of everyday heroes must transport the only known survivor of the plague from New York to California, where the last functioning viral lab waits for his blood. Although the antibodies he carries are the world’s last, best hope for a vaccine, he hides a dark secret that threatens them all. With humankind’s survival at stake, the ragtag band embarks on a journey of survival across three thousand miles of rusted-out post-apocalyptic America.

Z Nation is a dynamic ensemble drama that will plunge viewers into a fully-imagined post-zombie America and take them on an adventure with a diverse group of richly-drawn characters. As the reluctant heroes learn to work as a team and battle ever-more-menacing zombies, their flaws, idiosyncrasies, and moral dilemmas will ultimately become the heart of the show.

Dynamic Television is a packaging, acquisition and distribution company with a disciplined and global strategy focused on fostering transparent and integrated partnerships between talent, producers and broadcasters. The company is headquartered in Los Angeles and Paris.

The Asylum is one of the world’s leading brand-oriented motion picture and television studios. With a focus on high-concept, market-driven entertainment, like Sharknado, The Asylum finances, produces and releases 25 films per year through its direct pipeline to the nation’s top retailers and its network of international distribution partners. Since its founding in 1997, The Asylum has released more than 500 films and has built a library of over 200 original productions, including top-rated movie premieres for Syfy, Lifetime and Animal Planet networks.

What do you think? Is there room for another zombie series?

Why would you ever cancel a amazing show like Z nation whose ever idea that was, was a stupid one Z nation out ranks walking dead by millions 13 episodes they should’ve made at least 113 episodes!!!