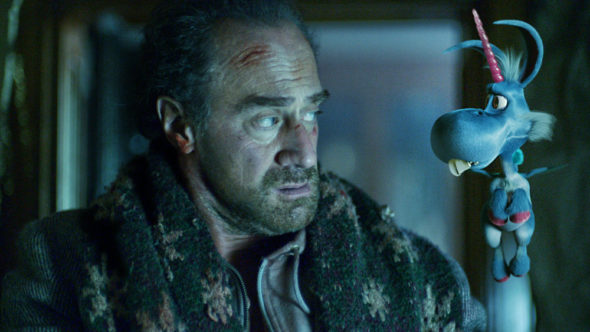 We hope this news improves your Monday. Syfy has renewed its Happy! TV show for a second season, ahead of the season one finale, which airs on Wednesday. Happy!‘s season two renewal was announced on the show’s official Twitter page, today. Check out the announcement and a preview of this week’s episode, below. Happy! is a TV series adaptation of the short graphic novel from writer Grant Morrison and artist Darick Robertson. Although their work is a closed-ended story, the writers left the show more open, in case of a renewal — a move which has now paid off.

A comedic, fantastical Syfy crime drama, Happy! stars Christopher Meloni with Patton Oswalt (voice), Lili Mirojnick, Joseph Reitman, Medina Senghore, Ritchie Coster, and Patrick Fischler. Happy! centers on a former cop, Nick Sax (Meloni). Now a hitman pretty much on the skids, Nick finds himself unmoored in a world full of murder and meaningless hook-ups. One day though, his drunken, depressing existence is turned upside down by Happy (Oswalt), an imaginary unicorn, who is out to save the day.

Syfy released a statement on the renewal to The Hollywood Reporter. Check it out:

“Happy! struck a chord with our Syfy audience and disrupted the TV landscape with its unique storytelling and outrageous performances led by Christopher Meloni,” said Chris McCumber, president of entertainment networks at NBCUniversal Cable Entertainment. “If people thought this season was crazy – I can’t wait for fans to see what Grant Morrison, Brian Taylor and the entire cast and crew have in store for Sax and Happy!”

Happy!: A Look at the Ratings

The first season of Happy! is averaging a 0.21 rating in the 18-49 demographic and 675,000 viewers. Although those ratings seem low compared to broadcast network TV series, of the Syfy TV shows we’re tracking, Happy! is the second-highest rated, by both measures.

Syfy has also released a preview of the first season finale, for Happy!. Watch it, now.

What do you think? Did you watch the first season of the Happy! TV series? Did you think it would be cancelled or renewed for season two? Let us know, below.

Happy! Is one of the coolest shows I’ve seen in a while. And having Christopher Meloni as the star is what actually pulled me in. Im so late and trying to catch up!!!

Happy is the best thing I have seen in ages, I love it, it is refreshingly different. I didn’t know anything about it, and was completely hooked when I saw the dancing scene in the first episode. I didn’t know Meloni was such a talented actor, he is amazing!! I’m so excited there is going to be a season 2, thank you for making something daringly different.

This is truly an under appreciated show! It is so clever, and Chris really hit his stride! If one pays attention, it is just so damn interesting a show! I hope for so much more!

Does anyone know the release date for Happy!? Season 2 on Netflix?

Has anyone found out the release date on Netflix for season 2 of Happy!? It said end of the year and it’s December 2018 now. I really want to watch it

Thank god it’s coming back , loved it from the first episode, totally hooked

LOved Happy ! Im SO happy it;s coming back! I hate when great series get cancelled ?!

Great show,best one this year

Premise: Let’s take a jaded and depressed hit man and pair him with an animated unicorn that only he can see. That could have gone wrong in so many ways. But it didn’t, AT ALL. It was surprisingly well done. Not campy, not (generally) sappy. Where most shows keep the main character in almost constant denial way too long after seing and talking to something that isn’t supposed to be there, our hero takes it in stride and works with it. Oswald Patton is perfect as the voice for Happy. Christopher Meloni, who has to act to, talk to, react… Read more »

Saw the first episode and was hooked!! Can’t wait for season 2. Thank you for renewing Happy!!!

Great news, for an off the wall show. I can’t wait for season 2.

I love the show. Love Happy and C.M. have since SVU hes a hero Im excited for him love the evil characters and the daughter and friends what a team they make

Last I checked. it was still above a 0.20 for season one. That’s a win for a Network where Failure is Acceptable.

Suspense, drama and comedy all rolled into one. The heck with your 18-49 demographics, this 64 yo love the show!