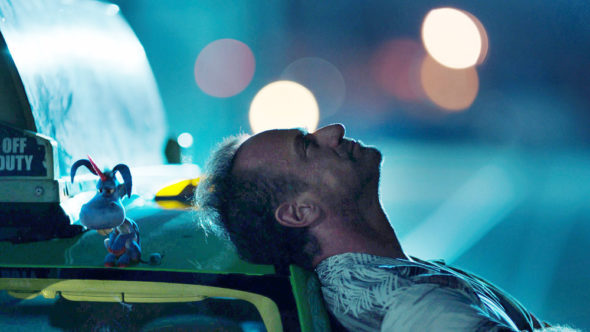 How pleased are you with the second season of the Happy! TV show on Syfy? As we all know, the Nielsen ratings typically play a big role in determining whether a TV show like Happy! is cancelled or renewed for season two. Unfortunately, most of us do not live in Nielsen households. Because many viewers feel frustration when their viewing habits and opinions aren’t considered, we’d like to offer you the chance to rate all of the Happy! season two episodes here. *Status update below.

A comedic Syfy crime drama, Happy! stars Christopher Meloni with Patton Oswalt (voice), Lili Mirojnick, Medina Senghore, Ritchie Coster, Patrick Fischler, and Christopher Fitzgerald. The season two cast also includes Ann-Margaret and Big Show. Happy! centers on a former cop, Nick Sax (Meloni). As a hitman on the skids, a drunken and depressed Nick had his existence turned upside down by Happy (Oswalt), an imaginary unicorn, who is out to save the day. In the second season, Sax is trying to stay sober and do right by his family, but old nemesis Sonny Shine (Fitzgerald) is now on a mission to Make Easter Great Again (MEGA) with the help of his demented Easter Bunny henchman.

What do you think? Which season two episodes of the Happy! TV series do you rate as wonderful, terrible, or somewhere between? Should Syfy cancel or renew Happy! for a second season? Don’t forget to vote, and share your thoughts, below.

*6/5/19 update: Syfy has cancelled the Happy! TV show so there won’t be a third season, at least on this cable channel.

Happy was way out there but I loved it. It was very well acted and extremely entertaining. I hope another network picks it up!!

I love this show, I watched the first season on live TV and the second season on hulu. Maybe the amount of people streaming the show on the second season contributed to the lower views/ratings. I personally think this show should not be cancelled especially when the story line/plot/acting and writing for the show is so good and original. I recommend this show to a lot of friends and would hate to see it end without tying up the loose ends season 2 left us with.

Where do you vote?

Wtf is syfy idiots? This is the best damn show they ever had.

best show ever. Syfy renew “happy” for a 3rd season

This show is awesome. My husband and I watch this show together after recording it on our DVR. A are very unhappy that they’re canceling a lot of our favorite shows and hope that we can save this one at least. It would be a shame to cancel because this is the only serious we watch on Syfy. Vote for happy!

This show is awesome. My husband and I watch this show together after recording it on our DVR. A are very unhappy that they’re canceling a lot of our favorite shows and hope that we can save this one at least. It would be a shame to cancel because this is the only serious we watch on Syfy. Vote for happy!

Happy is just such a surprise!!! I have to give each episode a 10, I am duly impressed, please, please renew this but do not take forever between seasons.

I LOVE this show!!!! It would truly be a shame if this doesn’t get picked up for a third season, for a few reasons. One reason, would be for it’s originality. This is by far, one of the most interesting shows I’ve ever seen. In fact, this is the first show I’ve watched, where I can’t wait for the next episode to air. Number two, is that there are still a lot of loose ends, and questions that need explaining. So, with all that being said, I hope our viewer opinions are all taken into account, and I hope to… Read more »

Love this show. It is OFF THE HOOK CRAZY!! We love that all the same characters are back and the holiday theme. We hope it comes back for another season.