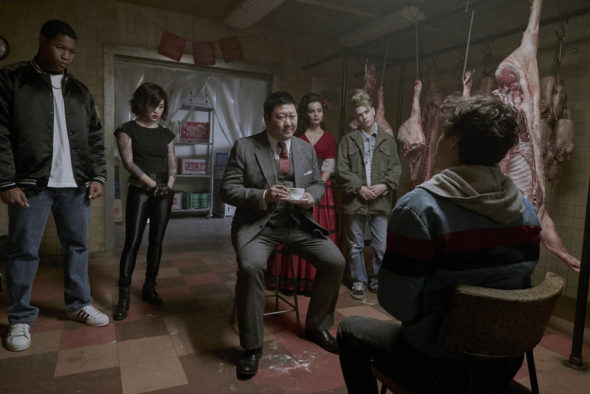 TV show description:
Based on the Image Comics graphic novel by writer Rick Remender and illustrator Wes Craig, the Deadly Class TV show is a dark, coming-of-age action thriller, developed for television by Remender and Miles Orion Feldsott. Within a late 1980s counterculture setting, the story follows Marcus Lopez Arguello (Wadsworth), a street kid who is recruited into Kings Dominion, a private academy. The twist is, this elite school is the top choice among the world’s premier crime families.

Mercurial and fierce, Master Lin (Wong) is headmaster of the Academy for the Deadly Arts. The students drive themselves crazy trying to win his approval, but his expectations seem unmeetable.

The enigmatic Saya Kuroki (Condor) has her sights set on being the Kings Dominion valedictorian. Dark, driven, and discreet, Saya plans to take no prisoners on her trip to the top.

Wildly unpredictable, Maria Salazar (de Faría) vacillates from being an outgoing show-off, to a lethal weapon, to a young woman paralyzed by her anger. Unlike more mundane schools, at the Academy for the Deadly Arts, her volatility is something to be envied.

Something of an outcast at Kings Dominion, skater punk Billy (James) is the son of a crooked cop. Meanwhile, despite being the son of an L.A. gang leader, Willie (Tennie) is a truthful, considerate guy.

As he settles into life at school, it is not long before Marcus realizes he must maintain his personal code, despite the vicious curriculum, his treacherous classmates, and all the usual difficulty involved in growing up.

What do you think? Do you like the Deadly Class TV series? Should this Syfy TV show have been cancelled or renewed for a second season?

Deadly Class was a work of art but being under SYFY screwed it up.

B(As in the letter B)

The deluge of idiosyncratic shows on TV is numerous. Though it is hard to keep up with even one series, this show was one of the few that would warrant either DVR’ing or setting aside the time to watch. The hardest part now is what to do in its absence… They never should have cancelled this show at least until after its second season.

This was a great show and should not be cancelled!

No I loved this show. I have been waiting for season 2 to fill in the blanks. I will miss this show like no tomorrow. I hope netflix would pick it up. Darn sifi you had a good one.

This show was my teen grandson and my favorite after school show to watch on demand…
sorry they have canceled it.

I’m upset this and Happy made Syfy like it was when being Human was on! They have nothing different than any other channels

I was waiting for this show to come back, it was great! Pity it is gone, I hope another station or cable picks it up. SyFy perhaps should reconsider.

This was a great show! Perhaps another platform will pick up the show and allow it to develop further.. I can see this show on Amazon, Netflix where it could be allowed to be more adult oriented in it’s content.. SyFy was no the right home for this show to begin with..