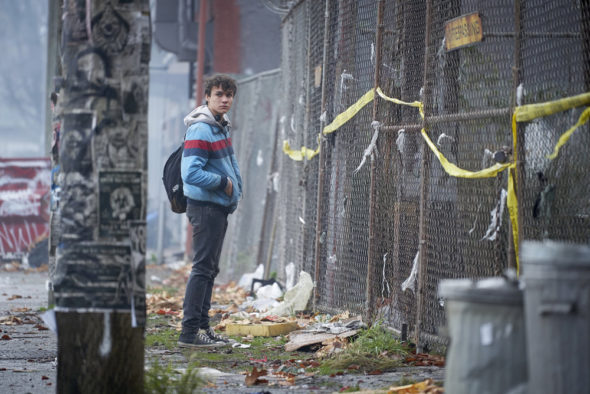 Will the kids at Kings Dominion continue to get killer grades? Has the Deadly Class TV show been cancelled or renewed for a second season on Syfy? The television vulture is watching all the latest cancellation and renewal news, so this page is the place to track the status of Deadly Class, season two. Bookmark it, or subscribe for the latest updates. Remember, the television vulture is watching your shows. Are you?

The first season of Deadly Class averaged a 0.14 rating in the 18-49 demographic and 402,000 viewers. Find out how Deadly Class stacks up against the other Syfy TV shows.

Will Syfy cancel or renew Deadly Class for season two? The series debuted pretty well and the ratings have have shown some growth so I think it will be renewed. I’ll update this page with breaking developments. Subscribe for free Deadly Class cancellation and renewal alerts.

6/5/19 update: The Deadly Class TV show has been cancelled so there won’t be a second season, at least on Syfy.

What do you think? Were you hoping that the Deadly Class TV show would be renewed for a second season? Are you sorry that Syfy cancelled this TV series, instead?

I loved the show, so sorry it has been cancelled

It will be deadly if this show is cancelled!

I have seen every episode and love it! I even have it on dvr so I can watch it more than once! Please renew!!!

Dude, please don´t cancel this show! It is so so so so SO GOOD!!! I know it sounds cliche but it is amazing. No one in my life, not my mom, my friends, nobody gets me. But its books, shows, and movies like this that tells me that there are people who think like me. I am Marcus, but I am also Willie, Billy, Maria, Lex, Saya, Master Lin, Fuckface, Shabnam, Scorpio, and especially Shandy. I know a Brandy, Viktor, Chico, Master Gao, all of them! But besides the the characters, Rick Remender also uses this show to bring awareness… Read more »

This show (Deadly Class) is AMAZING. I love the storyline and each week’s drama. You never know who is going to die. I never miss an episode. ..and I’m 51 years old. “Luv it!!!” Please don’t cancel.