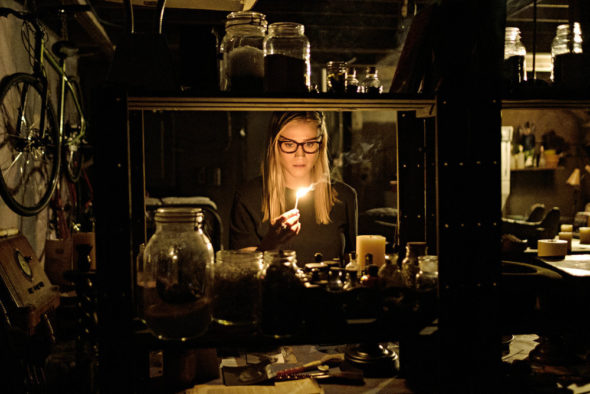 Does the show work without Q? Has The Magicians TV show been cancelled or renewed for a sixth season on Syfy? The television vulture is watching all the latest cancellation and renewal news, so this page is the place to track the status of The Magicians, season six. Bookmark it, or subscribe for the latest updates. Remember, the television vulture is watching your shows. Are you?

Airing on the Syfy cable channel, The Magicians stars Stella Maeve, Olivia Taylor Dudley, Hale Appleman, Arjun Gupta, Summer Bishil, Rick Worthy, Jade Tailor, Brittany Curran, and Trevor Einhorn. The series follows a group of friends as they discover their magical abilities and ward off evil creatures who threaten to destroy the magical world they’ve come to know. Last season, magic was saved with Quentin Coldwater giving his life to save his friends and the world. Now, there’s too much magic and, as the excess builds, an apocalypse looms.

The fifth season of The Magicians averaged a 0.11 rating in the 18-49 demographic and 353,000 viewers. Compared to season four, that’s down by 42% in the demo and down by 35% in viewership. Find out how The Magicians stacks up against other Syfy TV shows.

Will Syfy cancel or renew The Magicians for season six? The show is Syfy’s longest-running current series but it still does pretty well in the ratings. I think it will be renewed but, I’ll update this page with breaking developments. Subscribe for free alerts on The Magicians cancellation or renewal news.

3/4/20 update: The Magicians has been cancelled so there won’t be a sixth season.

What do you think? Were you hoping that The Magicians TV show would be renewed for a sixth season? Are you sorry that Syfy cancelled this TV series, instead?”

I’m gutted. I jus binged the set and I can’t believe its over? Why its so good. Now it’s on Netflix surely it could be reviewed as it would have a **** tonne more viewers around the world. Where can we petition for more episodes?

Honestly can’t believe the show is ending, really miss “Q”
Season 6 should find a way to bring him back.

Please!!!It is totally ridiculous that you would cancel a show that is so be loved by many. It’s doing well on Netflix, so perhaps Netflix should pick up the shell?!

Are you guys ******* crazy???? You are going to cancel one of the best shows on TV? Stupid! Maybe Netflix will possibly add a sixth season? Someone?

just finished watching the 5th season only to find out its been canceled for a 6th?? This has to be a joke. I’ve been watching since it first aired. This is my absolute favorite show. I’ve been bawling like a baby the past hour. They can’t just do away with the magicians because of ratings. I’m at a loss for words. I wish they would reconsider

I love love love this show! Adore all the characters! Story line is always fascinating. I even like the characters breaking off into songs. Please reconsider another season. There is so much unknown. Did The Dark king still live? How does the The new Baby manage its abilities? Do the Fillorians like the New Fillory?Does Penny and family ever find The lost friends? What happens to Plum? What happens to Brakebills?

Saved all the episodes on DVR to watch with my adult son who had been away at University. We totally enjoy the characters, the dialogue, the outrageously creative ideas we got to watch. Another season or 10 would be great, wish the folks that produce it would reconsider.

Definitely enjoyed the show and I wish they would renew for a season 6. It’s a good show. I’m so sad there will not be a season 6

It is rare to find such an enthralling and captivating TV show. The character development has been of a very high caliber, the story line for 5 seasons has been compelling , and the writing supporting all of this has been stellar. The production quality and special effect are beyond compare and each episode has left the audience with bated breath for the next instalment. I rarely watch television but this program has me glued to the television. Finding out it has been cancelled is very disappointing and erodes my faith in the decision making abilities of those who are… Read more »

Would love to see more seasons of The Magicians

This has turned into one of my favorite shows and I am HEARTBROKEN that there won’t be a sixth season! Please someone scoop this show up and continue the story?! We NEED to know what happens!!

RENEW RENEW RENEW THIS IS MY SHOWWWWWWW Q NEEDS TO COME BACK IN NEW FILLORY!

Please give us a sixth season of Magicia s

I absolutely LOVE this show and all of the characters! I can’t believe they would cancel such a great show. I was absolutely shocked finding out that season 5 will be the last season. Extremely disappointed! Cancel every other show on SyFy and bring back The Magicians!

Please to do another season of the magicians. Even

Please to do another season of the magicians. Even if you cannot keep all the characters, the magicians have a faithful following