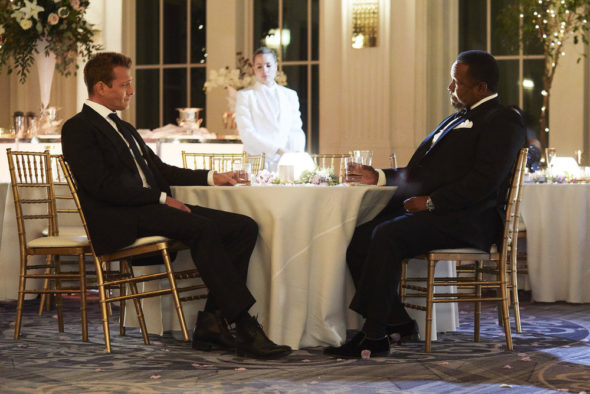 Will Specter Litt survive the loss of Mike Ross and Rachel Zane? Has the Suits TV show been cancelled or renewed for a ninth season on USA Network? The television vulture is watching all the latest cancellation and renewal news, so this page is the place to track the status of Suits, season nine. Bookmark it, or subscribe for the latest updates. Remember, the television vulture is watching your shows. Are you?

The eighth season of Suits averaged a 0.24 rating in the 18-49 demographic and 1.02 million viewers. Compared to season seven, that’s down by 29% and 22%, respectively. Check out how Suits stacks up against other USA Network TV shows.

Will USA Network cancel or renew Suits for season nine? The ratings are down but I suspect that they are good enough for a ninth season renewal. It remains one of USA’s higher-rated series. For now, I’ll keep an eye on the ratings and update this page with breaking developments. Subscribe for free Suits cancellation or renewal news.

1/23/19 update: Suits has been renewed for a ninth and final season.

What do you think? Are you glad that the Suits TV show has been renewed for a ninth season? How would you feel if USA Network had cancelled this TV series, instead?

I can’t believe with all the junk on television you are taking the one good show off the air, I will not watch Pearson. I want to see Harvey and gang and their unique personalities play out as they have since 2011.
I love this show, if it can’t come back then put Harvey, Jessica, Mike and Donna together in Seattle and let them fight for the good guys, it will be just as entertaining .

This is my favorite show so I definitely hope there’s another season. I miss Mike, Rachel, and Jessica but I’m still a big fan. ..”Green back boogie”.. oh yea!

Suits is one of the best shows on TV. It should go on for another 2 seasons and bring back Mike.

Yes, very pleased indeed to know Suits has been renewed. One of the best!

I just watched the finale for Season 8 of Suits and I loved it. I enjoy every minute of the show and I really hope that we have more of the show to look forward to. Lets face it TV shows and especially shows like Suits are pure entertainment value and I enjoyed the whole of Season 8 because it gave another dimension to the show.

Love this show!!! Watched it religiously all these years! Please keep this show going!!! No final season this year! One of the best on tv and love the interaction with all the characters!!! Please leave it on!!

I considered no longer watching Suits when Gina Torres (Jessica) moved on from the series, but continued to halfheartedly watch until it was announced that both Patrick J. Adams (Mike) and Meghan, Duchess of Sussex (formerly known as Meghan Markle, Rachel) were leaving as well. I tuned out before their exit even actually happened. It’s time to say good bye to this sinking ship of a once great show.

If Katherine Heigl is coming back, I’M NOT.

At the end of the finale after Donna & Harvey walked out came a trailer with the opening shot being the words “In 2019”, following by quick shots of scenes never seen this season and clearly showing Luis in charge. Following by another shot with the words “What Could Go Wrong?” Finally freeze photo, used this season with Harvey, Donna & Luis and “Suits 2019”. It sure seemed like the message was that Suits would be back for more episodes next year. Anyone else see that? Or did everyone stop watching after Donna & Harvey exited.

Ah! That’s why I keep seeing “Season 8.5”. Thanks for the clarification. I’ll take more Suits however I can get it. This season lost a little of its edge as it tried to adjust to the loss of 2 important characters. But it’s still appointment TV for me.

I honestly expected to hate this show w/out Mike Ross— but I actually find it is better this season. Who knew? Bring on another year!

They should never cancel this show

Please renew this show for a ninth season. It has become my favorite show. Though I miss the camaraderie of Mike and Harvey; I still think it well worth USA continuing onto a ninth season. Love all the characters and how they interact with one another. Besides, The Donna and Harvey interaction is so enjoyable.

I just recently found this show on Netflix and binge watched all 7 seasons in a very short time – didn’t even realize Megan Markle starred until my husband pointed it out. That being said, I so love those characters, but I love the show as a whole even more so. Harvey – Donna – Robert – Louis – Sheila – Katrina (and Brian) – Alex and now Samantha (I’m a long standing Katherine heigl fan – but I wasn’t sure how I’d feel about this role – it’s confirmed, I absolutely love her as Samantha) – I really love… Read more »

Thumbs down. Katherine Heigl irritates the heck out of me. I seriously miss Mike and the sparkle is just gone.

I agree the first 6 episodes of season 8 were not up to the normal standards ! All the men where acting like children, completely out of character for the last 7 seasons and not matching their years on the job, then the 2 woman would save everyone at the end of EVERY EPISODE ! I was like the Ghostbusters FEMINIST writers took over ! It wasn’t as bad as Ghostbusters but it was really tiring like someone wanted the show to be feminist and have all the women in charge. Despite the history of the show. The 1 –… Read more »

CORRECTION ! I made a typo. The last paragraph should say “Seasons 1 – 3 were really good. 4 – 7 was even better, but season 8 is bad overall !” And I would add, bring back the show we loved !!! Mike may not be possible but another character for Harvey to work with. The main talent in the show is Harvey , Donna, Robert Zane, Alex, Louis, and Katrina. Rated best to good. This is rating the characters and NOT how well they did any other show. I’ve heard Heigl is good, and she seemed good, but the… Read more »