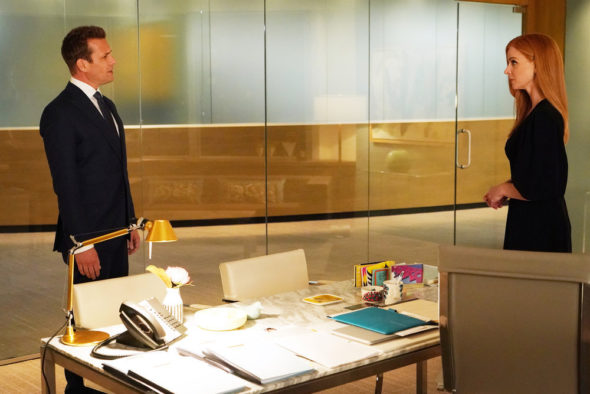 How are things working out at Zane Specter Litt Wheeler Williams during the ninth and final season of the Suits TV show on USA Network? As we all know, the Nielsen ratings typically play a big role in determining whether a TV show like Suits is cancelled or renewed for season 10. Unfortunately, most of us do not live in Nielsen households. Because many viewers feel frustration when their viewing habits and opinions weren’t considered before deciding this was the ninth and final season, we’d like to offer you the chance to rate all of the Suits season nine episodes here.

A USA Network legal drama, Suits stars Gabriel Macht, Sarah Rafferty, Dulé Hill, Rick Hoffman, Amanda Schull, and Katherine Heigl. In the ninth and final season, the staff of Manhattan corporate law firm, Zane Specter Litt Wheeler Williams must decide who they are and what kind of lawyers they want to be.

What do you think? Which season nine episodes of the Suits TV series do you rate as wonderful, terrible, or somewhere between? Should USA have cancelled or renewed Suits for a 10th season? Don’t forget to vote, and share your thoughts, below.

I’m sad now, That was only one of the shows that’s on TV worth watching.
The actors were great together, they
Made that show worth watching.
You just don’t have good shows to watch.
I hope the actors come together and work
Together in another show. Thank you
Joyce Rodgers

I love Suits, it’s one of the best television shows I have seen!! And I am deeply disappointed that it is not going to continue.
There are other shows that have continued on further than Suits, that really should have been cancelled after the first season.
I wish we as viewers had more of a say on whether a show continues to run or not.

Suits is one of the best shows on television. Cancelling it will cause your ratings for other shows to decline as we will search other networks for quality shows. It’s a big mistake and I hope you’ll reconsider. Thanks for your consideration,

Love this TV series Thank you for these last phenomenal 8 years of entertainment. I am so going to miss watching these great actors.

Love the show please renew for another season