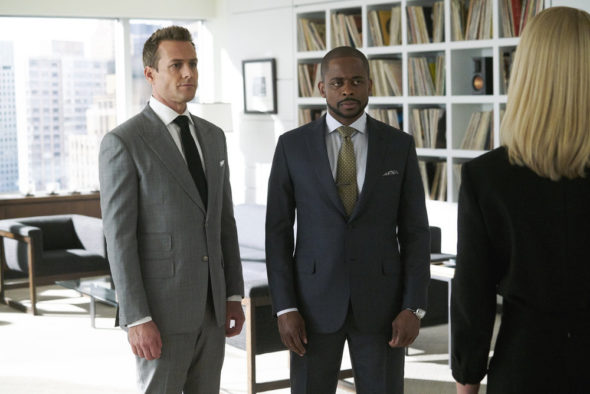 Are the lawyers of Specter Litt still taking care of business during the eighth season of the Suits TV show on USA Network? As we all know, the Nielsen ratings typically play a big role in determining whether a TV show like Suits is cancelled or renewed for season nine. Unfortunately, most of us do not live in Nielsen households. Because many viewers feel frustration when their viewing habits and opinions aren’t considered, we’d like to offer you the chance to rate all of the season eight episodes of Suits below.

What do you think? Which season eight episodes of the Suits TV series do you rate as wonderful, terrible, or somewhere between? Should USA cancel or renew Suits for a ninth season? Don’t forget to vote, and share your thoughts, below.

1/23/19 update: Suits has been renewed for a ninth and final season.

Suits is one of the best series yet. Even with Megan leaving kept it interesting and good. Would love a couple more seasons!! Love Harvey!

Excellent show. I enjoy the storylines, the dialog, and the amazing women’s wardrobes. Look forward to every episode. A keeper!!!

Please don’t cancel this show, I love Donna, Harvey, Louis, Zane, Alex, you know I like the comrade. They always are able to pull a rabbit out of the hat. This is my only show I watch faithfully. Harvey has to hook up with Donna. You know he loves her and she him.

I really enjoy watching SUITS. It’s one of the best shows ever ! Funny, serious, emotional, much drama, sad at times but yet they always have each other’s back. Of course, we miss Mike (Patrick Adams) but we knew sooner or later an actor would probably leave. The creator can always have the character that plays Mike replaced should Patrick Adams not ever come back or even to guest star. Sarah, Gabriel & Rick are such great actors! Just love them!

We look forward every week for this show. At first we weren’t sure how the story would go after Mike and Rachel left the show. But we are happy so far with the changes! This show is one of our top 5 picks… love all the characters!

Still a good show. Those complaining give it a rest. You knew that the 2 biz merging was going to have conflict. We have to see about KH. Suits has changed the last 2yrs. anyway as Mike was doing less and Lit doing more.

About a third into the Season opener, I had to turn it off. I do not see how any company can function in such a dysfunctional manner. The endless bickering, conflict, one ups-manship, backstabbing, promises made/promises broken, and just sheer outright dishonesty. All that was good about the show … is gone. When Harvey went into it, it was like the writers decided to “okay, jerk mode”. You could have ended on a high note, but you had to drag it down into the dirt. I enjoyed the show for seven seasons, but this is the end for me.

Not the same without Mike. Think I am done . And Katherine Heigl-

I love Suits, however I don’t like Katherine Heigl. I think the writing is good, topics are good and I think it can work without Mike and the Princess. Don’t take it off but get rid of Heigl.