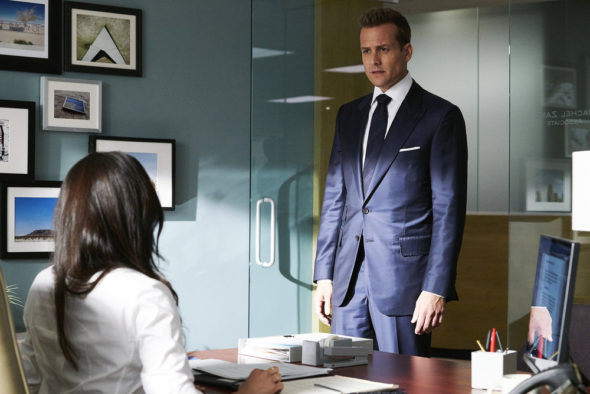 Suits is nearing the end of its seventh season, so what’s next? Recently, creator Aaron Korsh spoke with Variety about the future of the USA Network TV show.

We’re going to delve into all of those characters’ lives more and more; they’re not just coming in off the street, so to speak. We’ve always had the formula of bringing people back. And then what we also do from time to time is bring in new, juicy, hopefully awesome characters like what we’re doing with Katherine Heigl. So that’s what we’re going to keep doing and to me that’s what makes continuation possible. It’s not like we’re bringing in a whole new cast — we’re integrating and involving people you spend time with from week to week.”

And what about the season seven finale? Will Mike (Adams) and Rachel (Markle) get married?

What do you think? Are you a fan of Suits? Will you watch season eight?

Loved the show but won’t watch it any more. Can’t stand Heigl… not a likable person. Will watch Second City and see how that turns out. Hopefully, it will be good.

I sincerely hope when the new spin-off of Suits begins, you do not continue to blast the beautiful City of Chicago as you did on the final episode of Suits last week. I was disgusted at how you made Chicago seem like the most corrupt city in the USA. I may not even watch the show if I see the first episode continue putting Chicago in such a bad light.

I sincerely hope the new spin off of suits with Gina Torres does not continue beating up on the City of Chicago where I live. I was not pleased with the last episode where it sounded like the most corrupt city in the world. If that’s the way you feel about our beautiful city, you should not have chosen to film a new series here. I’m not sure I’ll be watching it as religiously as I’ve watched Suits.

The show runners are quite tone deaf to bring in Heigl. Replacing likeable characters with a person that everyone hates in real life isn’t going to boost the show. They will try a season after this one and it will fail quickly.

The Absolute BEST show on TV…can’t wait till Mar. 28th @9…I’ve cleared my calendar & WON’T be taking ANY calls…lol 🙂