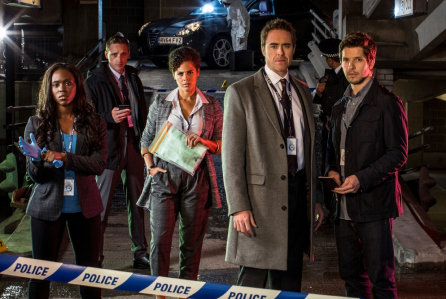 From Paul Marquess, the crime drama tells “the story of a team of top murder detectives and will be shot like a documentary. Each episode will feature a different murder in addition to a serialized story involving the lead detective’s missing wife.”

Acorn TV has ordered five episodes of London Kills, which is slated to premiere next winter.

With the world’s most recognizable city as its backdrop, LONDON KILLS will dramatize the experiences of a team of top murder detectives. Slick, modern and fast moving, the series will be shot like a cutting-edge documentary. Each episode of LONDON KILLS will focus on a different murder following the detectives as they uncover the truth behind the killing but will also have a serial story involving the lead detective’s missing wife.

Paul Marquess, Managing Director, PGMTV, said “I’m delighted to be making LONDON KILLS for Acorn. I’m convinced that London is the perfect backdrop for a contemporary police series. Shane Murphy loved the idea from the first pitch – and he and his team have been brilliantly supportive throughout the process. With acutely drawn regular characters and a variety of compelling murder investigations – as well as an intriguing serial narrative running right through it – LONDON KILLS is shaping up to be a sharp, smart, timely procedural drama. We can’t wait to start shooting.”

Creator Paul Marquess co-created and executive produced critically-acclaimed improvised crime series Suspects which ran for five seasons and 23 episodes on Channel 5 and Acorn TV. Called a ‘Brilliant original drama… totally gripping” (The Times) and a ‘realistic police procedural… (that) out-Law & Order’s its predecessor” (The New York Times), Suspects has been remade in both Germany and The Netherlands. Marquess also created Footballers’ Wives and Murder Investigation Team; series produced Brookside and Hollyoaks; and was Executive Producer of The Bill for four hugely successful years.

What do you think? Are you a fan of crime dramas? Will you watch London Kills?

I have really enjoyed London Kills and hope there is a second season.

Absolutely loved London Kills….I am hanging by a thread for next season….I binged watched the first season after watching the first episode. Looking forward to season 2….Great show…

We loved London Kills. The last episode of season left us hanging, Looking forward to getting at some of the issues resolved. Please bring on Season 2

Yes! Acorn has GREAT shows… they md more. I will watch!