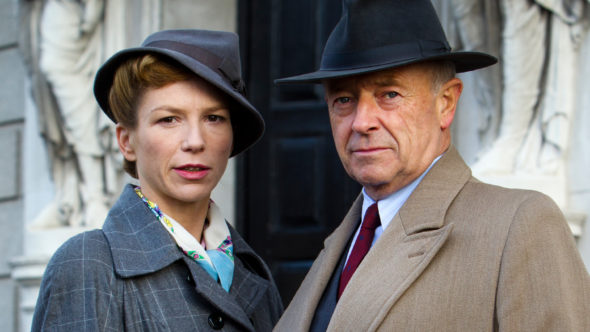 The Foyle’s War TV show on ITV was cancelled after eight seasons, because of rising production costs. Creator Anthony Horowitz tells Digital Spy he was ready for the British detective drama series to end. In the US, some seasons of Foyle’s War aired on PBS. The complete Foyle’s War TV series is available for streaming on Acorn.TV (but Acorn‘s series numbering is confusing).

“I’ve written 26* two-hour films for that show,” [Horowitz] said. “17 years of my life have been devoted to Foyle’s War.

“It had to come to an end sometime. We went from 1940 all the way through to 1947 – and I told countless true stories about the war. I felt that there were no more true stories to tell about that period, I’d sort of covered pretty much every area.

“I’m sad to see it gone, but it’s still out there and people are still watching it. That’s one of the wonders of the digital age.”

What do you think? Are you a fan of the Foyle’s War TV show? Do you think it should have been cancelled or renewed?

I feel robbed. My series numbering was 1-8 but I had the 2 2 episode seasons separately numbered, I recently discovered they were a single series of 4 episodes so my series numbering incorrectly ends on season 8 without the final season!!! So- feeling robbed because I didn’t watch the last 3 episodes now turns to sheer delight as I discover I have 3 brand new (to me) episodes to watch… hurrah hurrah!! I just wish there had been more but upon reading comments from the writer I think I have to agree with him that having devoted 17 years… Read more »

I’d love to see more of Foyle’s war.
Please write some more. Anthony.
So well written And so British!

The best thing EVER on TV. Well written and well acted. I have rented the entire series 4 ti8mes over the past 5 or 6 years.

Best series I have ever seen totally amazing I loved it and I wish they were more. I feel like there were a couple of episodes when Foyle went to America that are missing and if there are any digital copies floating around out there please someone let me know. I love history I love World War II I love spy stories and somehow this one seemed the most realistic of anything I have ever seen thank you for creating it.

It’s one of the best dramas on tv. We are enjoying it the second time around and would like to see a new series made

FoylesWar was ,in my opinion, one of the finest war time series I have seen. Micheal Kitchen is certainly a fine actor and plays his part that kept my interest. Very sorry to see this end. Top quality an d very interesting topic and time of our history.

How about a two hour movie!!?

Excellent series. Acting and research the same. There were still stories to tell and another 2 seasons would have been the icing on the cake.

Always enjoyed this PBS show. Much better than newer ones like Jamestown, Corfu ++

Please have more seasons of Foyle’s War. One of the best I’ve ever seen!!!

I loved Foyle’s War and truly hated to see it end. It was one of the more intelligent mystery shows on tv with an excellent cast, truly believable and historically accurate which informed viewers of our ever important past. I wish all involved would consider reinstating this marvelous program.

We have only 8 episodes left to watch. I am heartbroken . It always leaves you wanting more . I will so miss Mr Foyle and his cute little facial twitch, his integrity and dry humour . I hope he finds a nice lady . The Brits sure know how to make a good drama.

Just finished all the episodes for the first time and am depressed there are no more new stories! Love love love Michael Kitchen. His portrayal of Foyle was absolutely mesmerizing. Best show I have ever seen!