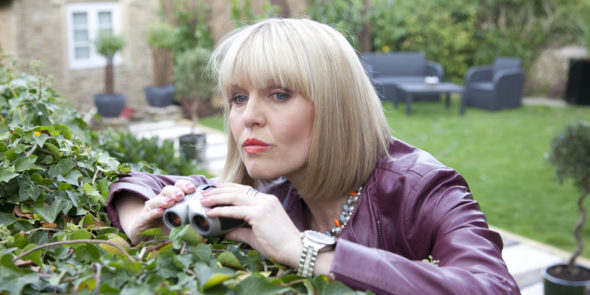 The comedy-drama stars Ashley Jensen as the titular Agatha Raisin, “a London PR whizz turned amateur sleuth, who becomes entangled in mischief, mayhem, and murder when she opts for early retirement in a small village in the Cotswolds.”

Season three of Agatha Raisin begins production in March. You can read more info from Acorn TV below:

Silver Spring, MD; February 27, 2019 – Marking its first renewal, Acorn TV is renewing one of its most popular mystery series AGATHA RAISIN for a third season with three feature-length episodes and a winter special. The Acorn TV Original Series was the first series to be commissioned by North America’s largest streaming service for British and international television when it commissioned Series 2 in 2018. For Series 3, Free@Last TV’s Barry Ryan and David Walton will continue to produce the series for Acorn TV with Catherine Mackin from Acorn Media Enterprises (AME), the UK-based development division for the Acorn brand of RLJ Entertainment, Inc., and Michele Buck from Company Pictures (an all3media company) as executive producers; and produced in association with all3media international. Guy Hescott returns as producer as does Ian Strachan as line producer. Acorn Media International will distribute in most English-speaking territories and international distributor all3media international will distribute in the rest of the world, including the U.K. and Australia.

Starring Emmy®-nominated actress Ashley Jensen (Catastrophe, Extras, Ugly Betty) and based on MC Beaton’s best-selling novels, the series follows a London PR whizz turned amateur sleuth, whobecomes entangled in mischief, mayhem, and murder when she opts for early retirement in a small village in the Cotswolds. Drawn into various mysteries, Agatha attempts to solve the crimes… often in rather unorthodox and amusing ways.

Series 3 begins production in mid-March through mid-July 2019. While Series 2 adapted three of MC Beaton’s novels, Series 3 will increase to four novels and will be available internationally as four by 90-minute television movies or eight by 45-minute episodes. The novels being adapted are Agatha Raisin & the Haunted House, Agatha Raisin & the Deadly Dance, Agatha Raisin & the Love from Hell, and, Agatha Raisin & the Pig That Turned. In Series 3, Agatha Raisin is on the verge of a new era; reconciled with James Lacey and launching her own detective agency. Could this be the start of her long-craved-for new life?

Star Ashley Jensen said, “I am beyond excited to be returning to my high heels with another series of Agatha Raisin with Acorn TV. I can’t wait to get started on her next fun and frolicsome journey.”

Catherine Mackin, Managing Director, Acorn Media Enterprises, said, “After a groundbreaking year with commissioning the second series of Agatha Raisin as well as London Kills andQueens of Mystery, my colleagues at Acorn TV are thrilled by the continued popularity of Agatha Raisin so it was an easy decision to renew it for a third season with even more episodes. M.C. Beaton and Ashley Jensen have created the world’s most fashionable and entertaining amateur detective. We’re excited to partner with Barry Ryan, David Walton and Michele Buck on another series of one of Britain’s most enjoyable mystery series.”

Barry Ryan, Executive Producer and Creative Director of Free@Last TV noted, “We are delighted that our partners at Acorn TV have decided to renew Agatha Raisin for a further four feature-length episodes. Even though our instincts told us it would work, the reformat was a gamble. We are excited and overjoyed that it paid off and to be bringing our wonderful cast of characters led by the brilliant Ashley Jensen back for more.”

What do you think? Have you seen Agatha Raisin? Will you watch season three?

Trying to find out about continuation of this program, Season 4?? It is wonderful and I cannot wait for the next installment!!!

I LOVE Agatha Raisin! Just love her sleuthing abilities 😉 and the way she can make me laugh! Love the other support characters too! What a great ensemble. Make more shows please!!

My husband and I love the show and are so happy to hear Acorn is picking up Season 3. When do you expect it to air?