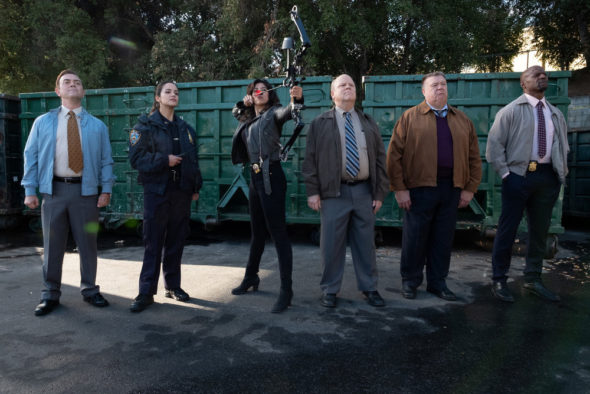 Although last year FOX cancelled this comedy after five seasons, that wasn’t the end, and this isn’t, either. NBC has renewed the Brooklyn Nine-Nine TV show for a seventh season. There’s more 99th precinct-style law — without the order — coming our way in the 2019-20 television season. The cast and crew got the good news at what looks like a table read. Check out the video, below.

“It’s been one of our great joys as a network to give Brooklyn Nine-Nine a second life,” said Lisa Katz and Tracey Pakosta, Co-Presidents of Scripted Programming at NBC, in a joint statement. “Cheers to Dan Goor, Mike Schur, Luke Del Tredici and David Miner, and our amazing cast and crew who each week turn New York’s finest into New York’s funniest.”

Brooklyn Nine-Nine: A Look at the Ratings

The sixth season of Brooklyn Nine-Nine is averaging a 0.91 rating in the 18-49 demographic and drawing an average audience of 2.83 million viewers. Compared to season five, that’s up by 23% and 61%, respectively. Find out how Brooklyn Nine-Nine stacks up against other NBC TV shows.

What do you think? Are you still enjoying the Brooklyn Nine-Nine TV series? Do you plan to check out season seven on NBC?

Love it.. Love all the character.

I watched this show for 3 episodes when it first aired on FOX. Those were the 3 worse time of my life. I understand that everyone has different tastes and styles. I even originally watched due to liking several of the cast. But got to tell you in my opinion. This is and always has been the worst TV has too offer. I keep hoping it will end. Just. So I can see these actors move on to better TV. The show is one big cliche and sophmoric at best. What a waste of some talented actors I wish NBC… Read more »

Even though I hate when people won’t respect other opinions, I feel like I had to press the dislike button. I say keep watching, maybe skip a few episodes, you may like the later seasons.

Wholeheartedly and adamantly disagree with you. The nonstop quick wit delivered by the cast is hilarious! I agree with TJ, maybe watch a few more episodes from different seasons. Maybe it’ll grow on you. I am THRILLED that it was renewed for a 7th season!! Yay for B99!!!!! WTG NBC!!