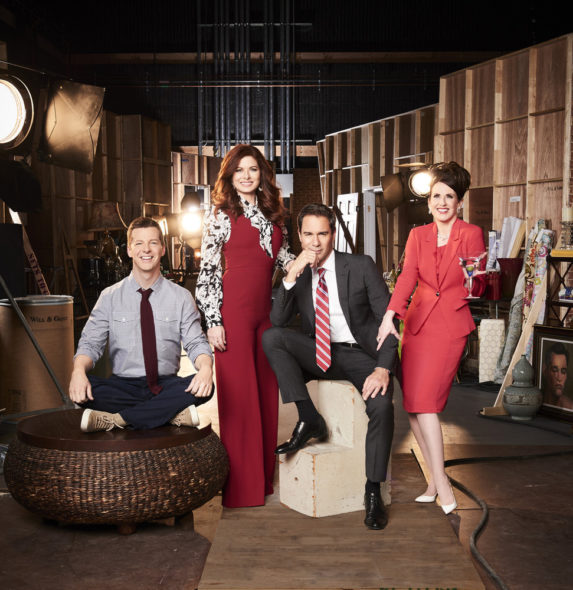 Here’s one final pot o’ gold, this St. Patrick’s Day. NBC has renewed its Will & Grace TV show through season 11. The sitcom originally ran from 1998 to 2006 on NBC, before being revived for the current, ninth season, which premiered in September of 2017. Ahead of the revival’s debut, the network picked up the comedy for season 10. Tonight, NBC Entertainment Chair Robert Greenblatt announced the Peacock Network had ordered an 11th season. Additionally, season 10 has been expanded from 13 to 18 episodes.

Will & Grace: A Look at the Ratings

In the live + same day ratings, the ninth season of Will & Grace is averaging a 1.57 rating in the 18-49 demographic and 5.76 million viewers. Compare its standing to the other NBC TV shows we are tracking.

Learn more about the Will & Grace season 11 renewal from this NBC press release.

‘WILL & GRACE’ EXTENDS ITS TRIUMPHANT RETURN WITH SEASON THREE PICK-UP

The return of “Will & Grace,” which began as an Internet reunion that turned into a one-season order and then a two-season order before it even went back on the air last fall, has just been ordered for a third season to premiere in fall 2019. With its razor-sharp wit intact and all four Emmy Award-winning actors back at the top of their game, one of the best NBC Must See comedies will return for an 18-episode third season.

In addition, the network has increased the season two order, which will begin again next fall, from 13 to 18 episodes. The announcement was made by Robert Greenblatt, Chairman, NBC Entertainment.

“As far as I’m concerned, we can’t get enough of ‘Will & Grace’ and 23 more episodes is music to my ears,” Greenblatt said. “We’re eternally grateful that Debra, Eric, Sean and Megan feel the same way and wanted to keep this good thing going. I’m overwhelmed by the euphoric response the new show has received from the press and the audience, and my hat is off to the unrivaled writing team of Max Mutchnick and David Kohan, as well as the brilliant directing of Jimmy Burrows, for consistently delivering one of the best shows on television.”

So far this season “Will & Grace” is averaging a 3.1 rating in adults 18-49 and 9.8 million viewers overall in “live plus seven day” figures from Nielsen Media Research. “Will & Grace” is NBC’s most-watched primetime comedy at this point in the season in eight years and has improved its Thursday timeslot by +48% versus NBC’s year-ago results for regular non-sports programming in 18-49.

“Will & Grace” has received critical acclaim since the show’s return in September. “Watching it is like running into an old flame who looks fantastic and is as bright and fun as ever,” said The New York Times. Entertainment Weekly wrote that “‘Will & Grace’ has been just as incredible as the original series: hilarious, poignant, contemporary” while USA Today added, “Watching the foursome is like taking in a tango by professional dancers.”

What do you think? Are you enjoying the Will & Grace TV series revival. Will you return for seasons 10 and 11 on NBC?

I feel like Will &Grace never ended in the first place…LOVE, LOVE, LOVE THEM…Cant get enough of them…

I love Will and Grace and am so excited that it is on the air again. This show has a dream team of actors and writers.

Nope won’t watch. Think it is trash. Amazing a show like this lasts, and Rosanne gets axed. Deb has said sooo many nasty things, but no repercussions. hummm….

It has retained much of it’s magic and am glad to see more.

Wow, didnt see that coming. Wonder where they are going to find advertisers for the show by year 3 when its ratings will be rock bottom? very strange…

First you say the ratings for this crap show are 1.57 (again, crap) but the press release below the article says the ratings are 3.1 (good). Which is it? Are they just keeping this dinosaur on the air for the irony?

A lot of people don’t understand what Live +3 and +7 are. I’d like them to cancel this show also, but I know NBC is in love with Debra Messing. They paid her obscene money for the Mysteries of Laura, which had atrocious live ratings. The people that advertise on this network need to start taking live ratings into account more. People can get rid of the commercials if they DVR the show. Why are you paying so much to advertise in very few people are seeing the ads?