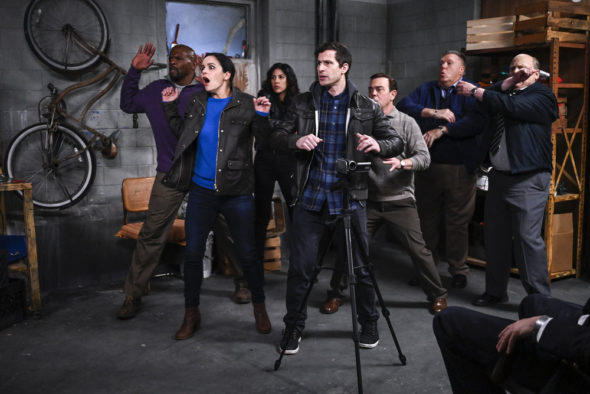 The detectives at Brooklyn’s 99th Precinct are staying on the case. NBC has announced that the Brooklyn Nine-Nine TV show has already been renewed for an eighth season. Season seven of the cop comedy is set to debut on Thursday, February 6th, at 8:00 PM. The program ran for five seasons on FOX before being cancelled and being picked up for season six on the peacock network. Universal Television (a part of NBCUniversal), Fremulon, Dr. Goor Productions, and 3 Arts Entertainment produce the series.

Here are the press notes regarding the season eight renewal:

· The seventh season begins Thursday, Feb. 6 at 8 p.m. ET/PT with a one-hour premiere before airing in its regularly scheduled 8:30 p.m. timeslot beginning Feb. 13.

· Last season “Brooklyn Nine-Nine” averaged a 1.2 rating and 3.2 million viewers overall in “live plus same day” Nielsens for a total-viewer increase of +15% versus the prior season on Fox. After 35 days of linear and digital delayed viewing, the show last season grew to a 3.1 rating in 18-49 and 6.4 million viewers overall, with 59% of that 18-49 rating coming from nonlinear sources – the #1 biggest digital percentage for an NBC series last season.

· The series is produced by Universal Television, a division of NBCUniversal Content Studios, Fremulon, Dr. Goor Productions and 3 Arts Entertainment.

What do you think? Do you like the Brooklyn Nine-Nine TV show? Are you glad that it’s been given an early renewal? Do you think season eight will be the end?

I think that the series will end after season eight.