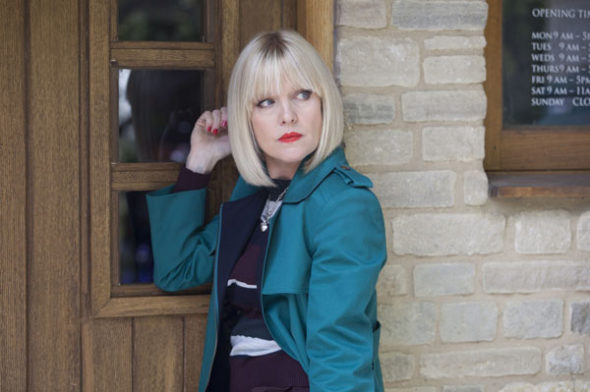 Agatha Raisin is back on the case. Recently, Acorn TV announced they’ve ordered a second season of the British TV show.

The comedy-drama stars Ashley Jensen as the titular Agatha Raisin, “a London PR whizz turned amateur sleuth, who becomes entangled in mischief, mayhem, and murder when she opts for early retirement in a small village in the Cotswolds.”

Season two of Agatha Raisin is slated to debut on Acorn TV in late 2018.

Television Critics Association, Pasadena, CA; January 15, 2017 – During their session for Acorn TV Originals Girlfriends and Striking Out, Series 2 at the Television Critics Association Winter Tour, Acorn TV General Manager Matthew Graham announces Acorn TV’s first series commission with the return of one of its most popular series, the fun, mystery series AGATHA RAISIN, Series 2 in 2018. Agatha Raisin was created for television by Free@Last TV. Barry Ryan and David Walton will continue to produce the series with Michele Buck from Company Pictures remaining on board as Executive Producer and Guy Hescott as producer. Acorn Media Enterprises (AME), the UK-based development division for the Acorn brand of RLJ Entertainment, Inc. (NASDAQ: RLJE), has partnered with Free@LastTV and Company Pictures to co-produce the new season along with Acorn Media International distributing in all English-speaking territories and International distributor all3media International distributing in the rest of the world.

Emmy®-nominated actress Ashley Jensen (Catastrophe, Extras, Ugly Betty), who can currently be seen in another Acorn TV Original, Love, Lies & Records from Kay Mellor, returns in the lead role. Based on MC Beaton’s best-selling novels, the series follows a London PR whizz turned amateur sleuth, who becomes entangled in mischief, mayhem, and murder when she opts for early retirement in a small village in the Cotswolds. Series 2 begins production in April 2018 for a late 2018 premiere. Series 2 will adapt three of MC Beaton’s novels, The Wizard of Evesham, The Curious Curate and The Fairies of Fryham and will be available internationally as three 90-minute television movies or six 45-minute episodes. Since its launch in 2011, Acorn TV remains North America’s most popular and largest streaming service focused on British and international television.

Shane Murphy, Managing Director, Acorn Media Enterprises, said, “After our success with co-producing several critically-acclaimed Acorn TV Originals including Love, Lies & Records, Striking Out, and Agatha Christie’s The Witness for the Prosecution, we’re thrilled to bring back our first Original Series as our first commission. When the UK broadcaster chose not to renew it, Acorn decided to step in and fully commission the show itself in-order to keep this terrific series going for our subscribers. We’re ecstatic to make it our first official full commission. We look forward to announcing several more commissions in the coming months.”

Acorn TV General Manager Matthew Graham, adds, “After another record year and ending 2017 with our biggest month of acquisitions yet in December, we’re thrilled to announce our first commission. Agatha Raisin remains one of Acorn TV’s most popular series and the fans have been clamoring for new episodes since its premiere in August 2016.” Graham notes, “2018 is shaping up to be our best year yet with even more exclusives and Originals for our subscribers. Acorn TV will feature ten Acorn TV Originals including BBC comedy Detectorists, new ITV drama Girlfriends and the return of Irish legal drama Striking Out, as well as exclusive new seasons of A Place to Call Home, Delicious, The Heart Guy, The Good Karma Hospital, The Brokenwood Mysteries, 800 Words, and Murdoch Mysteries, among many other much-loved series. As an independent SVOD, we’re passionate about curating the very best in British television as well as amazing series out of Ireland, Canada, New Zealand, Australia and more.”

Acorn TV premiered the pilot movie Agatha Raisin and the Quiche of Death and its follow-up eight-episode first season in August 2016. In the first season, Agatha found her hopes of a quiet life dashed when more murders started occurring in her village. Drawn into their mysteries, Agatha attempted to solve the crimes… often in rather unorthodox ways. Agatha Raisin’s mysteries shine with humor and intrigue.

What do you think? Have you seen Agatha Raisin? Will you watch season two?

Very good series. In the Jessica Fletcher type mold but made for more adult audience. Hopefully it will be shown on Sky later this year.