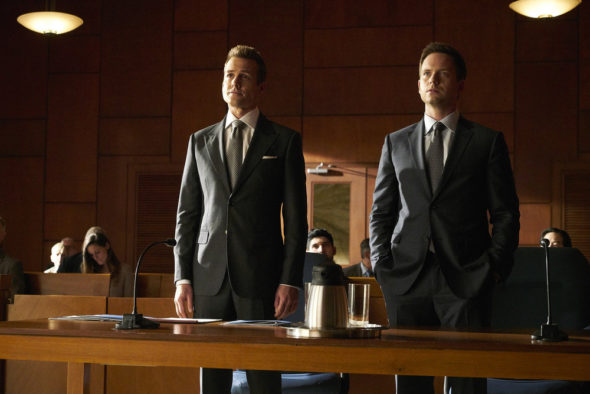 What’s in store for the final season of Suits? Recently, creator Aaron Korsh spoke with Deadline about his plans for the last season of the USA Network TV show.

In the interview, Korsh revealed he hopes to bring back some favorite characters for Suits‘ final season:

Korsh also said he hopes Patrick J. Adams will return but there is no current deal to bring anybody back for season nine:

As of this minute I don’t know which of our old original cast will be back and which won’t because we’re so early in the season. … The final 10, you can’t contemplate it without contemplating bringing Mike back. We’re contemplating it and we’ll see where we land, and how Patrick feels.”

And what about Meghan Markle? Reports have surfaced that USA Network is willing to pay millions to bring her back for a cameo, but Korsh denies the claims:

I have not arranged for millions of dollars to be donated to anything on behalf of anyone so that I can tell you, but as far as the original people coming back including Jessica, we’re so early in the season that we haven’t formulated what we want to do, so we can’t reach out to people before we know what we want to do.

What do you think? Are you a fan of Suits? Are there any favorite characters you’d like to see return?

It’s way too early to cancel.

Season 8 is flourishing after 2 of the stars left and it’s like watching something new that deserves it’s own long run of 4+ seasons.

I would like to see back jessica and Mike, because without them the harvey role won’t be as intresting as past.

I would like to see back Mike, because nothing is the same without him. Harvey and Mike were always the main subject for the action.

I’d Love for Mike to come back. Even though I liked aAll the actors/actress in Suits Mike was the Main reason I Loved the show. Mike and Harvey are great together.

The show was Mike and Harvey – without one, the show is really not the same

It would be perfect if Mike would come back for a final goodbye as he was in my opinion the main character in this show and without him, it has not been the same. Don’t care for Megan M, if she comes back or not, she was not a major character. BRING BACK MIKE!!!!!