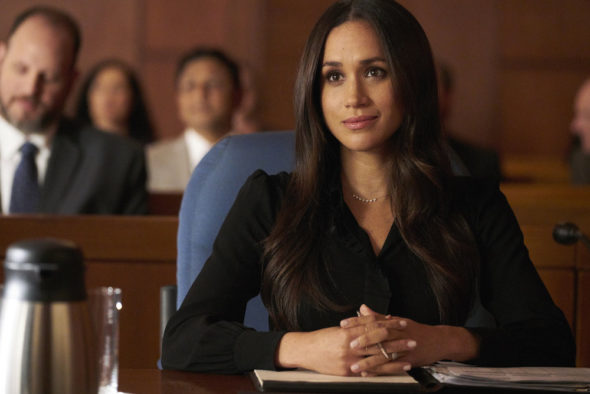 It’s been a busy day at Pearson Specter Litt. Suits has been renewed for an eighth season on USA Network, but without stars Meghan Markle and Patrick J. Adams (the latter of whom isn’t even marrying Prince Harry). The network has also announced Suits will return for the second half of season seven on Wednesday, March 28, 2018 at 9:00pm ET/PT. Additionally, the seventh season finale, in which Mike Ross (Adams) and Rachel Zane (Markle) will make their final bows, is slated to air on April 25th.

A USA Network legal drama, the Suits TV show centers on ace attorney, Harvey Spector (Gabriel Macht) and his college dropout protegé Mike Ross (Patrick J. Adams). Dulé Hill is being promoted to a series regular role in season eight, and will join returning regulars Macht, Sarah Raftery, and Rick Hoffman. The Gina Torres Suits spin-off will be introduced in the second half of season seven. 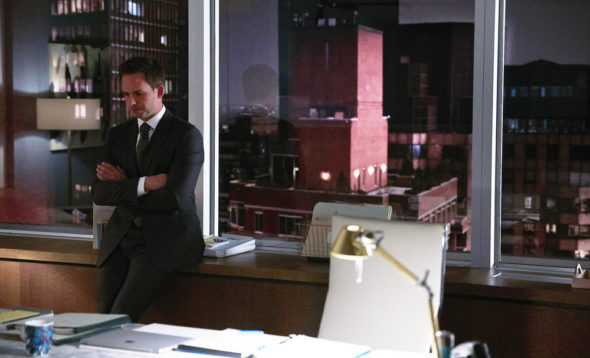 On Instagram, Adams posted a farewell to his Suits fans. Check it out.

State of the Union #MikeLoss

Check out this USA press release for more on the Suits season eight renewal and season 7B premiere.

Network to Air Back Half of Season 7 Beginning March 28; Will Say Goodbye to Two Beloved Characters

Additionally, the network announced that the back half of SUITS’ Season 7 will premiere on Wednesday, March 28 at 9/8c, culminating in a 2-hour season finale on Wednesday, April 25 – an arc in which SUITS says goodbye to characters Mike Ross (Patrick J. Adams) and Rachel Zane (Meghan Markle).

“After seven seasons, SUITS remains one of USA Network’s most beloved and popular series,” said Chris McCumber, President, Entertainment Networks, NBCUniversal Cable Entertainment. “While we’re excited for Season 8, everyone at USA will deeply miss Patrick and Meghan, and are grateful for the talent and commitment they brought to SUITS season after season. We wish each of them nothing but the very best.”

Said Aaron Korsh, creator and executive producer of SUITS: “I would like to thank Patrick and Meghan for their extraordinary contributions over the last seven years. Not only have they been outstanding in their roles as Mike and Rachel, they are also superb human beings who will always be beloved members of the SUITS family, and we wish them well in their days to come.” Korsh continued: “Speaking of days to come, I am incredibly excited to welcome back our phenomenal crew and cast – Gabriel, Sarah, Rick and Dulé –who will continue the roller coaster ride with all of our amazing fans. Season 8 will have everything from shifting alliances and internal power plays, to secrets, betrayals and fiery relationships. Keep an eye out for an adversarial new character that will give Harvey a run for his money.”

SUITS began when legendary hotshot lawyer Harvey Specter took a gamble by hiring Mike Ross, a brilliant, but not-so-legitimate college dropout, as an associate at his prolific Manhattan law firm. Nearly seven seasons later, this dynamic duo along with Louis, Donna and Rachel have become a family intertwined in one another’s triumphs and tribulations.

When the back half of Season 7 returns, Harvey must deal with the aftermath of Jessica (Gina Torres) losing her license, while trying to process how the kiss with Donna will affect his relationship with Paula (Christina Cole). Mike tries to juggle his commitment to the firm, his passion for pro bono work, and his engagement to Rachel. All the while, Louis struggles with right and wrong as his torrid affair with Sheila (Rachael Harris) deepens. 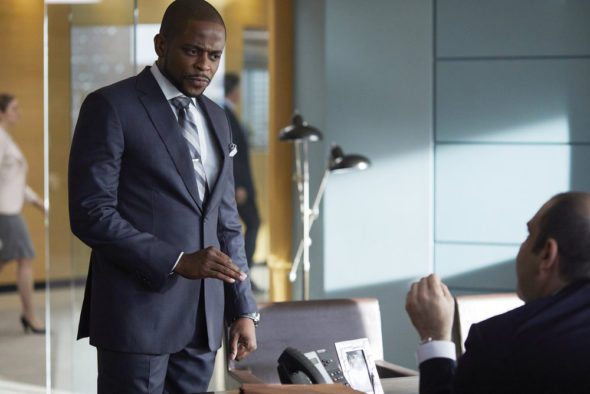 What do you think? Are you surprised Suits was renewed for season eight without both Markle and Adams? Do you plan to keep watching this USA Network TV series? Let us know, below.

I absolutely love this show. This is my first year watching the series. I’ve binge watched and I am currently caught up. I hated to see Mike, Rachel, and Jessica leave, but the show is still awesome. Can’t get enough.

I love watching SUITS! For as long as Louis Litt is around…I think it will keep its standard. Mike Ross character is a loss but maybe a new character can evolve..KH..joining..naaaah maybe this is a BIG mistake for SUITS…might not be as interesting as it used to be. But who knows.