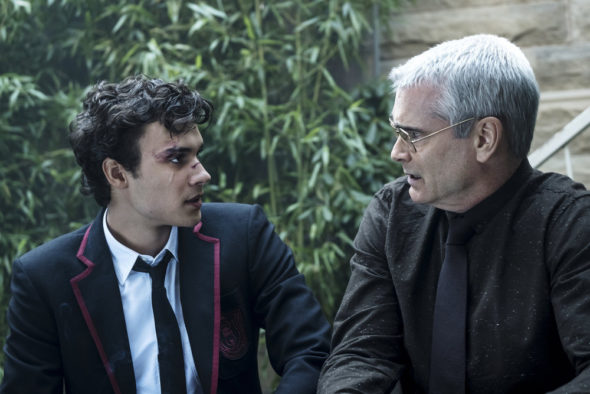 Set in the ’80s, the thriller centers on Marcus Lopez Arguello (Benjamin Wadsworth), a street kid who is recruited into Kings Dominion, a private academy. The twist is, this elite school is the top choice among the world’s premier crime families. The cast also includes Benedict Wong, Lana Condor, María Gabriela de Faría, Luke Tennie, Liam James, and Michel Duval.

On Twitter, Feldsott revealed Deadly Class was not able to find another network after Syfy cancelled the series earlier this year:

We’re sorry we couldn’t save it guys. @SPTV did their absolute best. https://t.co/L70V6mQo1D

SyFy we’re great partners. And wanted to figure out a way forward for DC. Ultimately they couldn’t. I’d ask all our fans to keep it positive. #SaveDeadlyClass

In the end we have a great season of tv and are truly grateful to each and every one of you. https://t.co/L08LxeCJHV

Deadly Class will not be moving to a new network. Which is sort of perfect when you think about it. If you want to see what happens after the 1st season you'll have to buy the comics, which are pretty keen. Thank you to our fans for the huge support. You helped soothe the sting.

What do you think? Are you a fan of Deadly Class? Would you have watched a second season?

Very disappointed! Of course the music was amazing and having grown up in Southern California in the 70s and 80s- I was amazed to hear songs that I would consider rare. Somebody really knew their stuff! The characters and the chemistry they had was awesome. Oh well………

One of the strongest first seasons I’ve ever seen. Loved the comic, loved the show. I doubt I’ll support another series on syfy channel. Whoever is in charge at syfy lacks vision and apparently taste. #savedeadlyclass

I loved that show, because it was different! Sad!

Definitely would have watched a second season.